Two things right up front. 1) No I didn’t lose a bet and paint this pink. 2) Yes this is what a gravel bicycle looked like when Reagan was in office. This is a photograph I shot of a 4 X 5 transparency taken in 1982 by Ken. Yes, that Ken. The guy whose studio in Manhattan on Union Square was above The Underground. And whose last name escapes me. It was from the first wave of frames painted after my then new identity program was launched. Along with several others, this unit ended up in my booth at the International Cycle Show which was an annual event held at The Coliseum at Columbus Circle. Data point: the show AND The Coliseum have long since vaporized. Sad.

At the time I was very excited for this frame and those made in the same batch. The new RS look was long in the making. So for me, anything I presented as part of the leap across the design line was important.
. 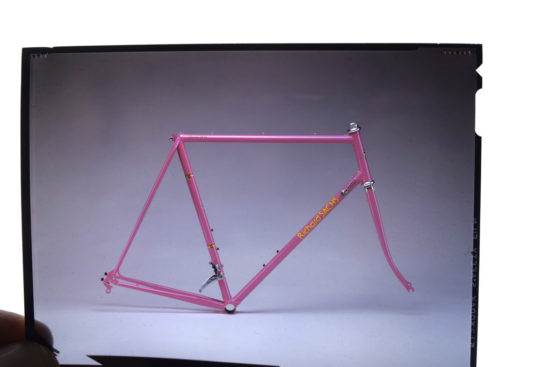