Reach Out And Touch Someone

My Social Media participation is limited to posting images, adding links, or commenting on my Facebook wall. Rarely do I engage in conversations. The exceptions may be threads about CX Natz dates. Or a parking issue at some race site. I’ll throw some birthday wishes around, and toss up an attaboy when a pal does well at something. But basically, I’m not there to play the Dueling Banjos equivalent of quipping. Comment sections have become MMA rings and are filled with people who live for the contact sport.

Most of these rooms have even smaller rooms inside. Some require hazing before you can see them. Then there are pages created by folks tired of those who crowd their personal e-space. Closed Groups, as some are called, with border walls around them. It’s not uncommon that they begin life as self-congratulatory entities with selected members patting themselves on the back now that the chaff has been eliminated, only to devolve into the internet version of that last scene in The Commitments, the one with once hopeful musicians in the band losing all sense of faith and then beating the ever-loving shit out of each other because things didn’t go as planned.

Maybe Pogo was right, “We have met the enemy and he is us.” Or to paraphrase Michael Corleone, we’re all part of the same hypocrisy. Some of us more than others.

Man there’s gotta’ be there’s just gotta’ be a more elegant way to connect. I’m looking for that way.
. 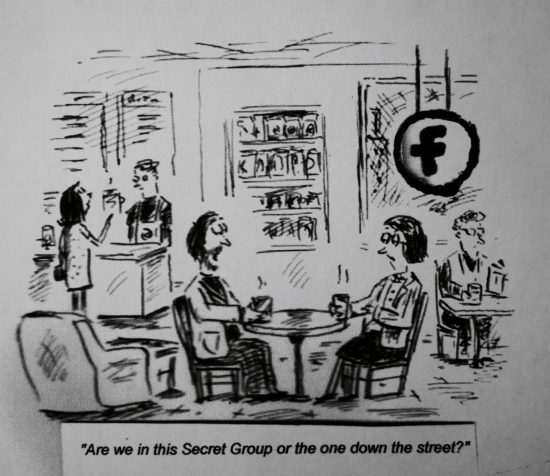