Here’s a brochure from 1975. It was a three page folded unit, printed both sides. One of the panels was an order form. These were mailed in nice square-flapped envelopes to folks who answered my advertisements placed in the day’s periodicals.

The originals were made by Riverside Press, just across the tracks from the Essex Steam Train. The latter remains and is going strong while the former closed years ago. It was a true print house that had all the lead fonts, noisy machinery, and ink smells staining the air inside the shop walls. I recall bringing a hand-made rendering to Rob the proprietor and he in turn would suggest a layout, type sizes, and paper options. Together we chose the decorative wingdings that served as borders between distinct thoughts or elements in the piece.

I’d go on to produce many forms of branding collateral. As time passed and my tastes refined, the projects became more elegant and austere. Some contained more technical information than others depending on the era. Others were more about me than the bicycles depending on the era. But all of them, each postcard, self-mailer, tear sheet, and catalog, were as important to me as the work I did at the bench.

I rarely look at my studio work without considering how to present it. Both tasks please me, almost equally. No matter how much I sweat the details when there’s a tool in my hand or some material on the table, finding a nice box to put it all in is part of the job.
. 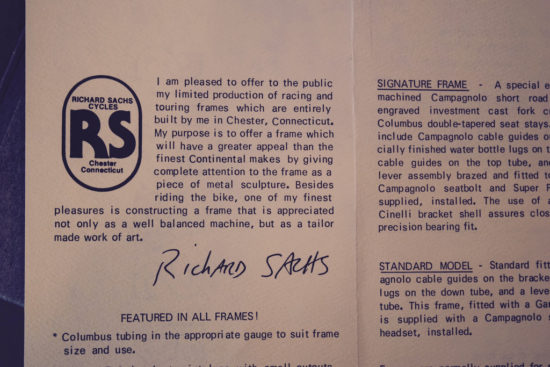 « Play & Work
Reach Out And Touch Someone »