Among all the 4 X 5 transparencies I’ve been posting there are a few dozen sheets with slides. This one from 1994 was taken by Peter Brentlinger. I’m thinking it was part of a series for the really expensive 4-color and eight panels if not more brochure I was doing. Lemme tell ya’ – that was a trip and a half. It was the transition era between digital printing and whatever it would be replacing (I don’t know the jargon). Everything we were doing- the shooter, the design team, a few subs – was analog and then converted to 1s and 0s as the last step before the pressmen took over and spit out boxes and thousands of printed pieces.

This picture was set up to illustrate work in progress. The message in this one is often missed. So I’ll explain it. I wanted some thumbnail images that showed that the braze-ons on my frames are always added to the tubes before the tubes are assembled into fixtures and made into frames. It’s an industry standard for the bosses and stops to be put on once the frames are done, a last step if you will. An afterthought. Some menial chore given to a lesser skilled member of the staff. That never made sense to me.
. 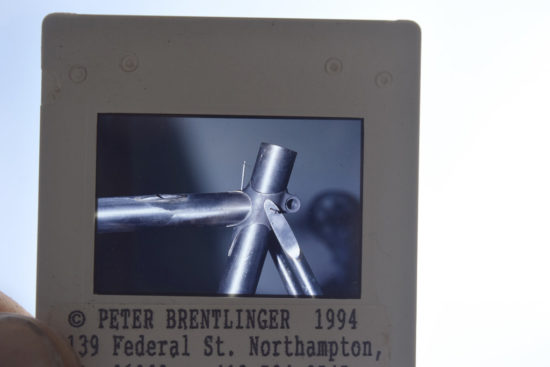