I started wearing red Wayfarers in the middle 1980s. The first pair came from a Tivoli Weekend street fair in Oak Bluffs. Retailers, closing for the season, would have tables full of inventory out to sell at nearly any price so they could board up and leave the island for the winter. My sense is that the red color was the odd duck because for many (and I mean MANY) years afterwards, I’d go back and buy more. Always red. Always Ray-Ban. Wayfarers or Wayfarer IIs. By Y2K and now with a closet eBay fascination, I began scoring them online as fast as dial-up speed would allow. Over the years I’ve probably had three dozen pair. Or more. Always red. Just because.

In recent times I’ve seen a resurgence in the brand and notice models that appear to be made as homage pieces. Or new colors. Or variations on a theme. It kinda’ sorta’ makes me gag – and also want to never wear these again. I do. Sometimes, not often. I’m reminded of a David Brooks op-ed piece called Lord of the Memes in which he writes, “Second, in order to cement your status in the cultural elite, you want to be already sick of everything no one else has even heard of.” I summon up that quote often, so apologies if it gets rote.

Peter Brentlinger shot this image in the middle 1994.
. 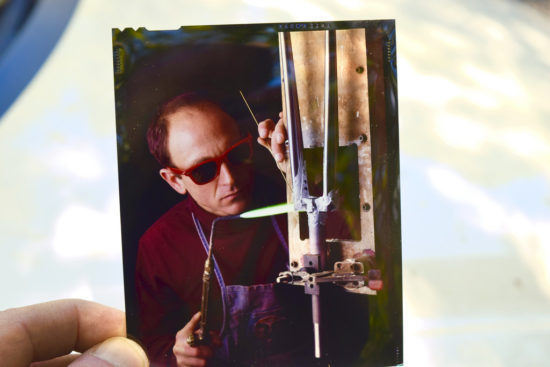