Shows No Effort At All

Do people change? Hmmm – more likely, we are wired to be a certain way. When obstacles present themselves or lines in the sand are drawn, we find ways to best negotiate them. Though we may get to the other side, it’s more about growth than change. If we really look at our paths, the tools we use to navigate are similar to what we were given when we landed here.

I save a lot. Piles of greeting cards and letters. Photographs. Mementos from adolescence. My draft card. The Social Security card. Yearbooks. All of my racing licenses beginning with my very first one in 1971. Articles about me. Articles about folks I admire as well as objects I covet. I save friends, enemies, anecdotes, and lines from movies. I save the happiest of times, and the most hostile and forgettable ones too. All of them are here in closets, in drawers, or in my head. These are touchstones from many eras of my life (so far). They consume far less space than one might imagine. Rather than obsess about these memories or let them define me and keep me a prisoner to a past I can’t escape, I manage them. Learning to manage has been a life lesson.

When I was a youngster, I attended a Yeshiva from grades K through eight. School and the classroom environment were always tedious and boring. Rarely was I a good student or did I distinguish myself from my classmates. I took up space but never realized it at the time. I didn’t ever try that hard, and I don’t recall ever spending an extra minute on homework or any related school activities. There were no outside interests pulling my attention away from the classroom. My way included doing a minimum amount of work necessary to get by. This character trait was established early and would eventually weave its way through so many things I involve myself with.

At Yeshiva, we had report cards sent home monthly (yes, I saved all of them), and all the children needed to bring them back to school with a parent’s signature. Checks and balances, I guess. On one side of the report card was a grid system in which the Rabbi could pen in grades. For those who can’t read Hebrew, those scratch marks are alefs, bets, gimels, and dalets. On the rear there were lines and comments that could be checked for extra emphasis. For what seemed like an eternity, the line that read Shows little effort was checked off each month. And for what seemed like an eternity, I paid little attention to it. At whatever tender young age I might have been, I thought the word effort had an entirely different meaning. I had been living with the assumption that showing little of it was a compliment, and that the check mark somehow meant I sailed through another month without causing concern for the Rabbi or my mom.

When you get to an obstacle or line in the sand and need to make a decision regarding these, it becomes an opportunity to grow. Do you change with the situation or do you find a way to make it work for you? When I took home the report card shown below with the words Shows little effort replaced with Shows no effort at all (and written by hand, in ink no less…) it took less than a moment to realize that the original measure I had about myself was wrong and that I was not the student I thought I was. Funny – I remember thinking that despite learning the new (real) meaning of the word, it never occurred to me that I should resolve to begin showing any effort going forward.

As sobering as the Rabbi’s hand-written words might have been, nothing changed, and I never felt compelled to worry about it. The die was cast early on. The student I appeared to be in the eyes of my teachers was, in fact, the student I would always be. Courses, classrooms, teachers, and campuses came and went, but for all the time that passed, I never really embraced the effort thing. Some grades were high, some weren’t. Trying hard in school was always a foreign language and I didn’t speak it.

For every adventure that includes my name when the credits roll, and for all the projects I have been part of, the traits that defined me as a youngster can be found in these. Somehow I have tiptoed around obstacles and crossed lines in the sand with very little effort atmo. It’s not to say I was never paying attention. I think the most apt explanation is that no matter how much wind was blowing or what forces were working against me, I found ways to fall through cracks and endure without even knowing it until a time later in my life. It’s a trust thing, I guess. And it’s also looking at the bigger picture and not worrying where you fit. You just fit, and that is its own reward.

As a child it became clear to me that things take care of themselves. The trying, the planning, the goals, and bucket lists – the efforts made to be more or have more – these likely have a place, but in my life they are memos I never received. I am thankful for all I do have and wouldn’t trade a thing. The annotations on the report cards would be a sign of things to come – I never made any real effort. I still have moments of disappointment and the occasional failure. They don’t define me any more than the successes do. To quote a line from Spinal Tap, in response to the band’s manager (Ian Faith) chastising a clerk at a hotel they were checking into, the character (Smitty Brown) remarks – 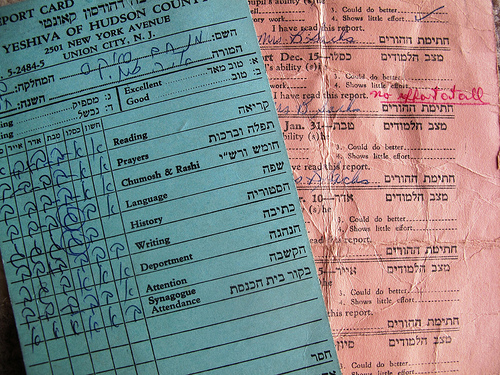 « Imitation Art
There Are No Apps For Wisdom »