So What Happened Here?

There’s this scene from Sunset Boulevard when, upon being recognized (in her own home, no less) Norma Desmond says, “I am big, it’s the pictures that got small.”

I first saw the film in the early 1970s and never forgot it, much less the quote. I’ve used it many times since, well – maybe not so much lately. I finally accept the changes. Or maybe I’ve just conceded to them according to my opinion.

Bicycles were, at least to a point in time, all made by hand. The pedestrian and price point models were produced on assembly lines, but by people. Some may have hated their jobs, while others – one would assume – took pride in their daily tasks.

I’m reminded of another text I clipped in the early nineties, one that I used for our wedding invitation, and it also lives on my site’s front page. It appeared in The New Yorker, and was about Balthus:

“Needing some air, he went into the garden. ‘Ah, look at the afternoon light,’ he said, for shadows were forming dark zones in the pasture recesses, as they do in his masterpiece, ‘The Mountain.’ He went over to a small shed in the corner of the garden, the back wall of which was made of finely carved wood shingles arranged in a design. ‘You see,’ he said, ‘the trouble they took for something that could not even be seen. That is what has been lost. It was lost when workers began selling their time. Or as you say in America, when time became money.'”

Bicycles are no longer made, they are manufactured.
. 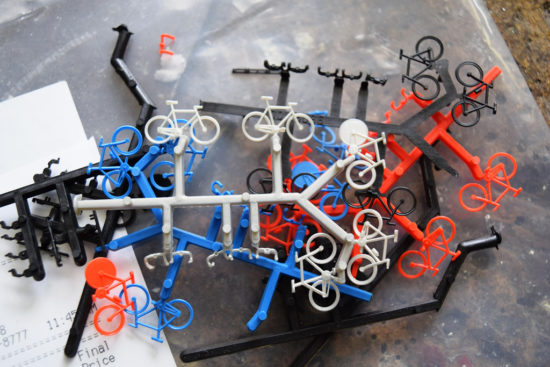