I am an opinionated eff, especially regarding my craft, my niche, and design. Someday, and that day may never come, I may be a recovering opinionated eff. But until that day becomes a reality, I take support and validation for my opinions whenever and wherever, thank you very much.

My personality was never very accepting of such things. When I decided I wanted to make bicycles, the decision was about making my bicycles, ones that fulfilled my expectations. Heck, we all need clients – but the ideal became modeling a business such that folks said yes to me rather than me saying yes to them. Someday, and that day make never come, I’ll look back on this personality trait and try to find its roots. But for now, I want to finish typing, work a few hours, screw off online, and then get a ride in. So anyways…

Look at the image pasted below. Its message validated my point of view long before I had the tools to do anything with it. The cartoonist Johnny Helms sent it to me about thirty years ago. It appeared in print almost a decade earlier. I may have still been a teenager living abroad when it was published. The cartoon made sense to me. It made light of the client. It made light of the transaction. It made light – and being able to laugh at all this is the perfect antidote to the strong opinions we voice when we open our mouths, peck away on the keypad, or reach for the Meisterstück.

There was a time when I might have said yes to the order being mapped out in the cartoon. I’m glad the niche is as healthy as it appears to be so that I can lateral this fictitious client over to one of my pals. If there really is a God, my pals will lateral the client to their pals. #listentoyourownvoiceatmo

PS A few more of my Johnny Helms images are stored here. 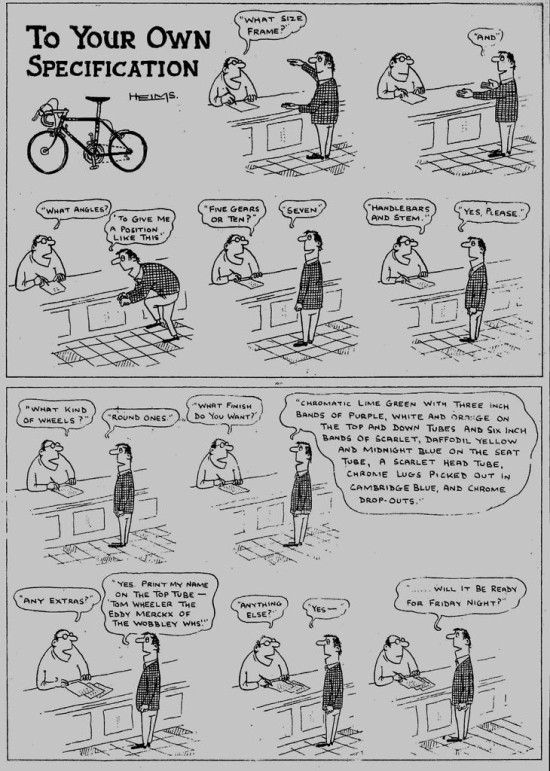