The less I have to pack, the happier I’ll be. Since we’re all responsible for our own happiness, today I am listing a 20-pack of fork crown liners with the card suit motif. A parcel of 10 pair will cost you an even $72 if you live anywhere in the CONUS. For international buyers, the S+H would be added depending upon location. It would make me happy to send a bunch of these out in the next 10-12 days.

To purchase, send a PayPal for the aforementioned amount to therichardsachs@gmail.com.

Stories and internet threads about these pieces, as well as the use of hearts, spades, diamonds, and clubs on bicycles, abound. I only know my own, and I’ve peppered it out for generations when asked. In 2004, Velo-News was doing an article on the subject and my contribution to the question of Why These Shapes? is pasted below. It’s from an email I sent to Lennard Zinn.

PS The lovely coasters and the seashell shown in the image are not included in the offer.

I think the best way to start is at the beginning, circa 1974. My best friend was in sales in the bicycle industry. There was a point in time when he traded lines with a European fellow; my friend rep’-ed the European fellow’s lines in North America – the other guy rep’-ed my friend’s goods overseas. In 1975, my friend met his guy in Belgium and the European guy was starting to sell frame building parts, the fork liner with the playing card figures was among these pieces. My friend returned with some to show me. I had him immediately order me 2000 pieces because I thought they’d give my new line of frames some much needed élan. Nothing more. Nothing less. In the ensuing years, whenever my pals in the industry asked me about these, I’d sell them from my inventory or would give the source information away. By 1980 these parts were so fucking ubiquitous that I grew tired of seeing them on my forks. Simply put, they became too common and I was responsible for that.

Fast forward to 1992. That year, I added a limited edition 20th Anniversary model frameset and “re-introduced” the playing card pieces on my forks as a way to bridge the eras, especially since by that time most had forsaken using fork crowns and some even started using pre-built forks. In essence, I was the first North American user of this design. In the early days of my frame building career I sought ways to make my bicycles unique and interesting. Had I not been as magnanimous, I could have been the only user of these pieces, because my friend and his European contact did not see much profit to be made in these small low cost parts. The happy ending to all this is that about seven years ago I found the son of the original supplier – and he still had the remaining stock that was produced in the 1970s. I made a deal to buy all 9000-plus parts, partly to ensure that my supply would never run out and partly to be able to offer them with the Richard Sachs fork crown that I was about to bring to the market. So, to answer the “Why?” question about the playing card motif, the only thing I can say is “Because!” 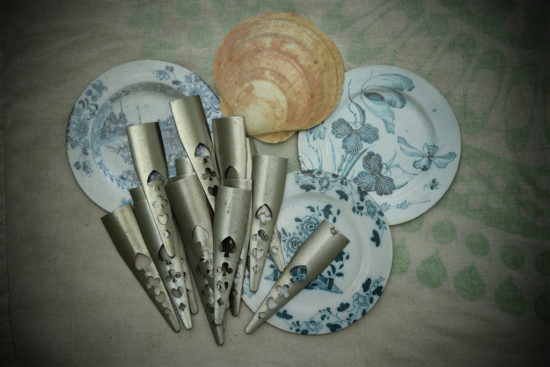