The Road Test Of Time

This was kinda’ sorta’ cool when it happened. Mostly because I didn’t know. One of these issues has a VML (visible mailing label) and I found it one morning in my box in Chester. The staff at Bicycle Guide had done a Road Test (upper case to connote importance) on one of my bicycles several months prior to the publication of this Buyers’ Annual. They told me after the fact that they had a decent stock of images that weren’t used and thought this one would go well on the cover.

Those were good days, at least the ones I remember. Back then, not everyone was a writer, or had a blog, or had ways to let the rest of humankind know what they were thinking. The fellows at BG were (then) a ragtag group of folks who defected from Rodale Press and, with the underwriting of Norm Raben, created a magazine from scratch, one less indentured to pressures from its advertisers or the very convention of writing mundane articles for the entry level cyclist.

For a brief moment in time, Bicycle Guide was the perfect storm of journalists, content, and presentation. But over the years its edge eventually dulled as founding members left for more lucrative salaries and – as is always the case – editorial had to pay more attention to what brand managers and agencies wanted than it did when the model was first conceived.

There were many like Bicycle Guide in the pre-internet years. None survived that road test of longevity.
. 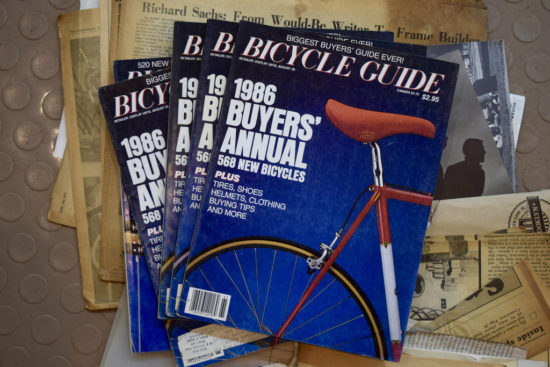