Yes. I have been fixated on the Nervex Ref 32 lug set lately. I’ve called them my mashed-potato sculptures, as per those scenes in Close Encounters of the Third Kind. And that they remind of Norma Desmond since they are and were perfect yet the world around them changed and left them in its wake. Hey I’m not that nostalgic, but I do believe some things were once better than they are now. Alas.

When I first touched frame materials, most were seriously crude by today’s standards. The preparation and finish work were left for the maker. My predecessors and even some of my contemporaries were also metal-smiths, not simply joiners and assemblers as we’ve become. In a typical studio, working with the torch was left to the senior staff members, while the futzing of all the little fittings was carried out at the bench of those being groomed to become competent frame makers themselves. This is how we cut our teeth. The quality of even the finest components was so poor that, unless one developed the skill to reshape, file, re-fit — unless one had the hands and eyes to discern the right clearance and proper aesthetics—no piece would get far enough along in the process for the masters to be able to perform their magic.

This seat lug, elegant as it may be, already has over an hour in its transformation from an as-delivered part. I don’t think people who make frames now understand the evolution of how things came to be. Many don’t care. And most are making bicycles the way children play with Lego toys.

It’s a different trade now. A smaller one. I’m glad I got to see it when it was big.
. 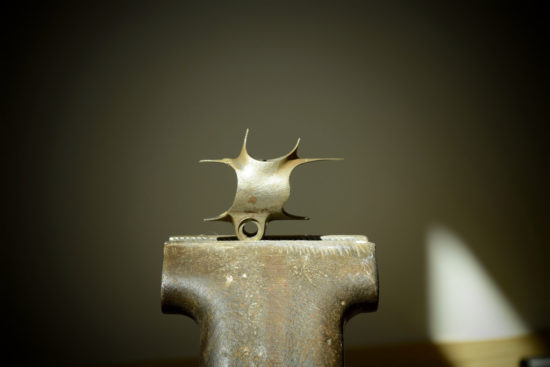