I have many images that Peter Brentlinger shot in 1994 for a Bicycle Guide story. I think this one made it into the print issue. Funny – now that I’m rifling through old transparencies and slides I’m finding many versions of the same picture but with different exposure settings penciled in on the sleeves and little holders. I remember this bicycle well. By the mid 1990s I had begun to tire of the red and white thing and decided to seed the room with variations of the theme. This was a burgundy metallic pearl with white pearl contrasting paint panels. It was also a test bed for a custom decal run that Gary at Screen Specialty Shop did. This was one of the prototype sets that had the NBC Futura font that would eventually become a default typeface on the frames. Gary probably did 10 sets quick and dirty that, if I were to approve, he’d take the films further into the depths of the machine (Read: his Mac) and dial in every corner, line weight, pixel, ink hue, and space between the twelve letters that comprise my name. And of the bicycle, those with eagle eyes will notice the 28 hole Campagnolo Record Pavé rims. At 22.2mm wide they were the single best road rims ever made. Anyone who thinks otherwise can leave the internet.
. 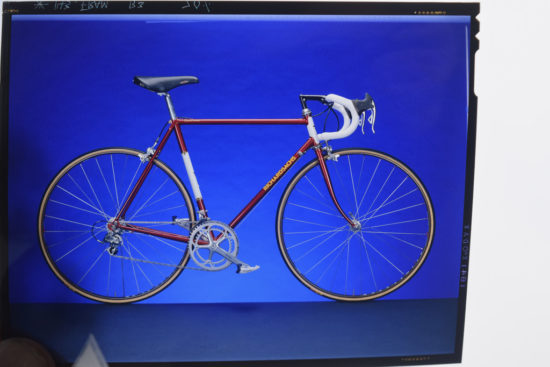