In 1970 I arrived at The Peddie School for the last time as a student. I came to love the environment, the tradition, and believed even then that the campus experience would brand me for life. All boys were permitted to apply to four (only) colleges, and there were some rigid guidelines regarding the selection. We were slotted into schools that best matched our CV as well as what we wanted for ourselves going forward. Limiting the number ensured that no one was wasting anyone’s time, and that we’d all get on the path to the right college for each of us.

I saw myself as a certain personality type and collected the details and handbooks from places that looked like a good match for me. Bard, Bennington, Antioch, and (iirc) Reed were my targets. I wanted the open-mind, open space experience that came from schools like these. I wanted to continue the writing thing that began in my sophomore year in Hightsown. I wanted to have fun. Woodstock era type fun.

My college counselor was Alfred Lozier. Mr. Lozier had been my American History teacher in junior year and my dorm master that same term. He was a physically imposing man who also coached varsity basketball. Unlike other teachers at Peddie who seemed more tweedy, and dressed like they shopped at Press or Peet, Alfred Lozier wore (gulp) short sleeve dress shirts and clothes that looked like his mirror was still out on loan. He was more at home dressed for gym than for chapel.

I was the water to Mr. Lozier’s oil. My head was all about the counterculture and Anti-war era while he, a Wake Forest grad, was paid to win games and tournaments. In his class, my grades were so poor that his reports haunt me to this day. Maybe because what they say is true. Richard’s reading comprehension is so bad that he often doesn’t remember one day what we discussed in class the very day before. It took me years to realize how right he was.

Mr. Lozier’s mentoring was lost on me. I stubbornly stuck to my list. And one by one, was rejected. In a last ditch effort to get this Peddie boy into college, I was allowed to choose two fallbacks. I applied to Goddard and Franconia and was accepted.

I never continued my studies at either school. Or at any college for that matter. I was the only Peddie ’71 student who didn’t go to university once leaving Hightstown, either after the summer break or at all.
. 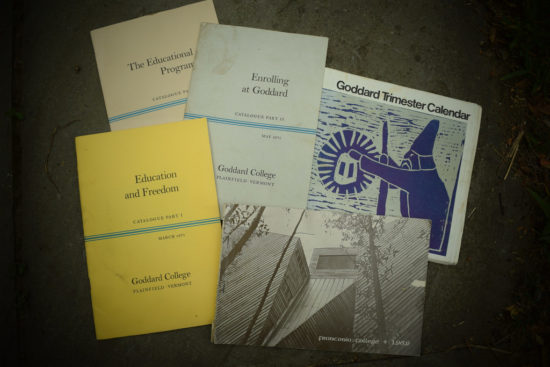