Why I Left The Recording Industry

My writing has changed over time. I do far less of it than ever before. These days, the subjects are about issues that touch me – my trade, the sport, me growing up – shit stuff like that. Back then, it was about recording information. Once upon a time, I clung to minutia.The small details still matter to me, but not as much as they did in the last century.

It’s hard to say if I was obsessed with it, but writing down every spec, measurement, and shade of blue was part of the routine. From the day I started my business in 1975, I recorded what I did, who called, what was said, who owed me, and who I paid. I also kept unending lists about what I made at the bench. Notebooks full of dog-eared, coffee stained, yellowed pages contain information about commissions, sizes, colors, materials used, and unique features that identified them. Thousands of lines, and a client’s history lived on each one.

Keeping these books were a way to have something tangible that says, here is a man’s life. I’ve always admired those with experience, and never felt I had enough of it at a given time. And as mine was accumulating, putting pen to pad was one way to tell a story that grew with each order.

I hit the wall in the 1990s. I became bored with the process, and overwhelmed by it too. In the beginning, mapping out my brand’s life with seemed a good way to document the days and record history as it happened. Perhaps I’d be leaving a paper trail for others to obsess about someday. Or maybe it was about controlling the conversation, even though I was having it with myself.

It took me three decades to feel comfortable in my professional skin. As the years passed, I devoted fewer moments each day to making notes about them, and spent more time in conversation with my tools and materials. I still keep the ledgers, and each line has a client’s name and serial number. If I’m not too distracted, I may write down the frame size, but not much else. There’s still minutia here. The small details will always matter, but recording them no longer does. 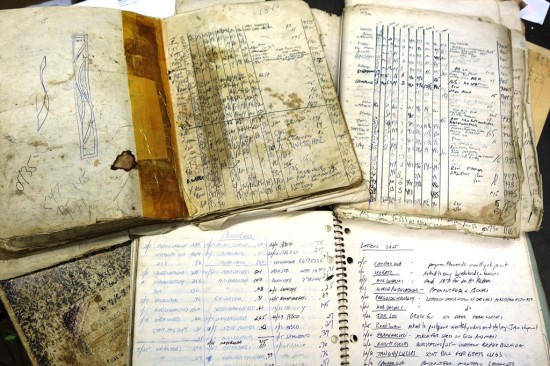