A Visit To Richard Sachs

Well, I just had a great chat with Richard Sachs at his workshop in a very quiet part of Warwick, Massachusetts.

If anyone could give me advice it’s Richard, as he’s an accomplished and successful frame builder with decades of experience. 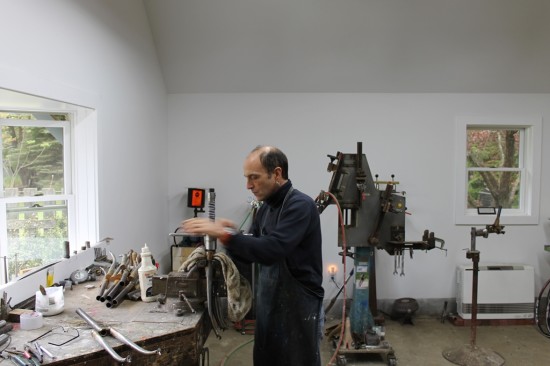 Richard cuts a crown race on one of his cross team forks.

Richard started building frames in the US after returning from England where he apprenticed with Witcomb Cycles in the early 1970′s.  Upon his return to the US, he began making frames for Witcomb USA, and then set up on his own.

During my visit, Richard explained how his unconventional career path began when he didn’t get a bike mechanic job he saw advertised (he only intended to work there for a few months before concentrating on becoming a writer), and then, almost out of spite he wrote to several frame builders in England, partly to prove that he could transcend that role .  Witcomb replied, inviting him to come over to England, and welcomed him into the fold almost as a family member.

Richard remains part of the racing community to this day, which plays an important part in promoting his bikes.  The latest manifestation of this is his cyclo-cross team.  Richard was working on his team bike frames when I visited him.

We spoke about the history of the industry, and how the trade was more viable previously.  Good bikes had to be sourced from a frame builder, especially for racing.  The rise of mountain bikes triggered new production technologies, and when the mountain bike market slowed down, the bigger companies applied these technologies to making road bikes.  Frame builders were dying out by the mid 1980′s.

I spoke to Richard about the realities of working as a frame builder today.  He gave me the following advice:

Don’t romanticize, think of it as a business, not a craft.

Don’t sell at too low a price just to get things moving and frames made.

If possible, don’t start as a frame builder without frame building experience – try to work at a bike factory, where you will gain much more experience, possibly in several areas of construction.  You will likely be given more responsibility over time, and then, after maybe hundreds of frames later, you can take your skills to your own shop.

Deposits are to secure a place in the frame builder’s queue, and shouldn’t be thought of as income.

Clearly determine your market – you are competing against the Treks and Cannondales of this world.

Invest in a workshop first.

People skills can be more difficult than frame building skills.

I asked Richard how important it is to establish a brand identity – He replied “Good frames come first, but talking online is very important, and extra merchandise has provided more revenue streams”.

When I asked what was the most difficult part in running a frame building business, Richard told me that it was the administration of a high volume of incoming orders, with the accompanying requirement to be accommodating and gracious to everyone, regardless of how much correspondence each person in the queue demands.

I spoke to Richard about his equipment, noting that the shop wasn’t full of machines like some of the people I had visited previously on my trip.  Richard uses no powered machinery – a hangover from his Witcomb days, where there were no machines, and even the drill was hand-powered.  “Manual labour, muscle memory and hand-eye co-ordination can be just as good and quick with experience” he argued,  describing machinery as unnecessary for him.

Richard’s frame jig is made by Bicycle Machinery, and apart from a few other small fixtures in the workshop, it looks almost lonely in the shop, surrounded only by benches,  hand tools and lugs.

Here are some pictures from the shop: 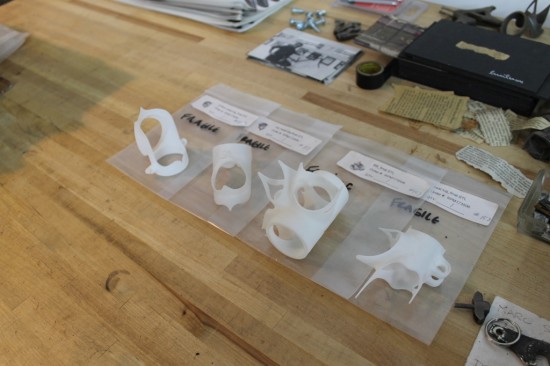 Prototypes for Richard’s own lug range. 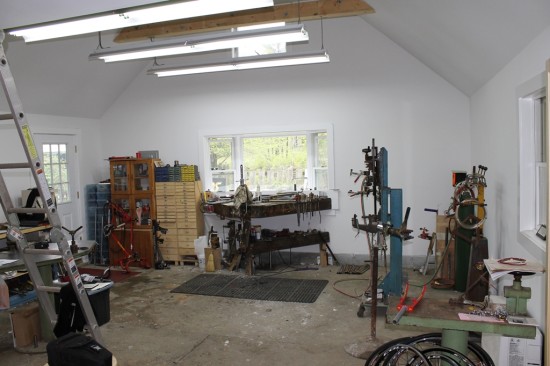 Richard’s workshop. He has been located here for about a year and a half. 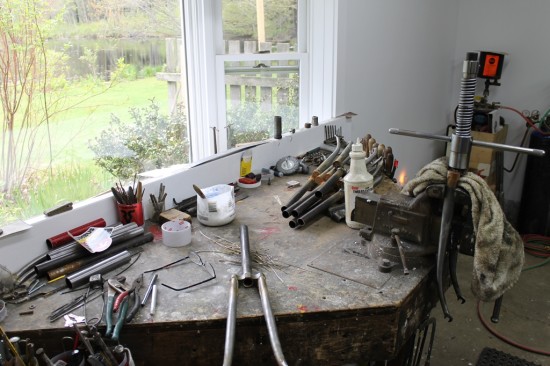 One of Richard’s benches 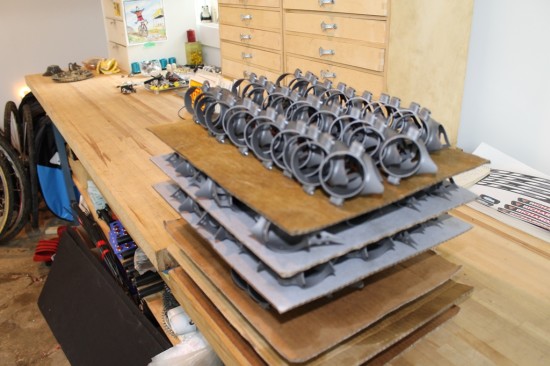 I rounded up my meeting by asking whether Richard thought that frame building has a bright future in the US, and he expressed concern that he thought a saturation point has been reached in the number of frame builders in America, but he was more optimistic about the UK.

Looks like we’d better get our fingers out chaps..

The preceding article appeared on ninelittletubes and was originally posted on May 19, 2011.