Where do ideas come from – and where do mine originate? With so much of my life spent with and around bicycles, as well as being a maker of them, I wonder about this. I arrived on the industry’s doorstep by accident and poorly prepared, and have managed to eke out more than four decades of a career from it all. Some of it can be attributed to beginner’s luck. But those early, innocent days of the 1970s are long gone and I am not. I’m here, still enjoying the trade, the lifestyle, and all things that come with making, riding, and racing bicycles. What cards did I play right to make the cut?

Bicycles don’t ever really change much. There are the wheels. A drive train. Some components that make it all easier to pedal forward and to stop. And the most important component – a rider. As the years pass, the industry finds ways to make newer, lighter, and sexier bicycles, but they’re still just bicycles. When I first became enthused with riding, I almost simultaneously embraced the bicycle too. The activity as well as the tool for it drew me in. But I was only 17 or so and had no real cycling related influences. There was no catalyst to invite me further into this new hobby. I liked it, and it made me feel good. Was this enough of a reason to let the needle in? Perhaps it’s the best reason to do anything at all.

When I set out to make bicycles, the first steps involved finding a way to England so I could follow someone else’s path. I didn’t really want to make bicycles, or learn about making bicycles; the time line began when I was beside myself with disappointment. A position for a bicycle mechanic appeared in the Village Voice and, without so much as calling the number or pondering the scenario, I left the Port Authority terminal on 42nd Street and Eighth Avenue with a one way ticket on a Greyhound bus to get a job in Vermont. I didn’t get it. To avenge the situation, somehow I decided that making bicycles trumped fixing them, and I was going to show these cats (the ones who ran the classified in a newspaper printed some seven hours south, I might add…) that I mattered. I compiled a list of known bicycle makers in England and wrote to each expressing a desire to learn the trade in return for (my) free labor. I ended up in London within a year of first boarding that bus.

It wasn’t as if I had an industry background, or a body of work, or some inkling that I, Richard, could possibly bring something new to the table. I was raw. I was beyond raw. I spent my formative years in classrooms and on campuses, rather than learning trades or taking classes at a vocational school. When I arrived in London to begin a bicycle maker’s life, I really had no idea I was doing such a thing at all.

In the years since, I wonder how I made it last. I once mentioned that my life was like a balloon that the wind blew around, and then around some more. I am also on record as saying that one of the reasons I never drifted away was because I was too stupid to see the warning signs. And I meant that. But all in all, I like making, riding, and racing bicycles, and the pleasure it all gives me feels good.

But do love and good feelings comprise enough of a cushion to ride out one’s entire adulthood (so far)? Is this a formula for not just happiness but commercial success as well? As with my humble and almost accidental entrance to the trade, the years that followed were also uncharted. Despite that I enjoy making bicycles and have felt this way all along, it’s fortunate that others also liked the ones I make. Almost from day one, I had clients, an order queue, and no shortage of media coverage. It all works well in harmony to sustain a business and to make a guy like me feel affirmed in his choices. The truth is, though, I never felt as if I was doing anything different. I am nothing if not the receiver of all of my earlier experiences, all the secrets I was told, all the processes I saw at the workbenches of the folks who showed me, as well all the lessons taught in the classrooms I’ve sat. Everything I do, or introduce into my brand’s vocabulary, has roots somewhere. Am I a borrower – a stealer? I don’t knowingly or consciously push a boundary or bring something to the market that I can cite as the work of another person or from another place that I can recall being. Ideas just flow and I go with them. Are these the rearranged plans and secrets of those who came before me? Most likely, yes. At what point do they become mine? I wrestle with this.

Appropriation is a word I love. It speaks to me because it’s a kinder, gentler word to use when borrowing, copying, and stealing would send the wrong message (or maybe the right message in some instances…). I think the act of appropriating best explains why my brand has endured, and also why my lifestyle has too. My bicycles and how I have presented (and represented) them have roots in all that came before me. My influences, choices, and biases are a result of my path and the teachers I have met on it. Family, friends, rabbis, professors, fellow workers, classmates, and every visual that has ever made my radar – I tap this deep well whenever a new idea comes to mind. I can’t think of any gems that didn’t come from somewhere else. Nothing is original.

This brings me to another thought about my life and my bicycles. Fashion designer Marc Jacobs added the following caption to a photograph that appeared in the style section of the Sunday New York Times. The text resonates so much with me that I find myself clinging to it often.

Appropriation is a totally and actual way of creating. Every field works to a certain extent in that way, and I think one is absolved of being a thief or a fraud when one fesses up to what informs one’s work. I always get this quote from Chanel wrong, but the gist of it is that he who insists on his own creativity has no memory. I don’t think it’s necessary to say how fantastically original one is, and if one does, one only has to dig in the past to find out who came up with that idea. Innovation is an evolutionary process, so it’s not necessary to be radical all the time.

I am not Richard; I am all the people I have met and all the events that have shaped me, especially the ones that put the air in my balloon. I have taken from all of you. 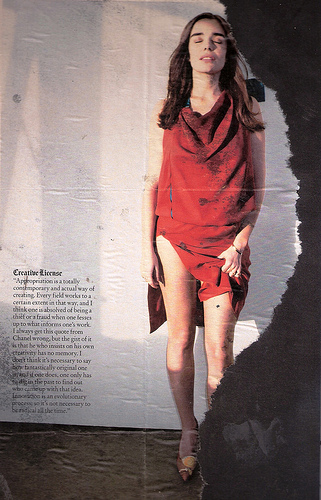