According to our opinion, iconic framebuilder Richard Sachs is pretty great.

Rarely a day goes by that the Warwick, Massachusetts-based Sachs isn’t present on Facebook, Twitter, or Velocipede Salon, the frame-building forum he helped start—many times all of the above. Sometimes he’s answering questions or posting a comment, but often as not, he links to photos and even long, thoughtfully written posts.

Many of Sachs’s posts tend to be simple, short items—a single photo of a current frame project or even a sock design, for example, with a gnomic, four-word caption. He’s been shooting for years and is particularly fond of detailed macrofocus photography. And sometimes the images are not original, but re-posts of others’ work (with attribution, of course).

Sachs can, and regularly does, cross-post to multiple platforms with the click of a button. All of this has the effect of making him seem omnipresent. He’s not; he’s just really efficient. In fact, his prolific flow of content contains a fair bit of recycled material. On April 1, he put a “mission statement” on Facebook that made the rounds on social as others picked it up. Sachs laughs. “No one ever looks at the post date,” he says. It was 2013. (The item was actually a spoof mission statement, too, which he says people also didn’t understand.)

What about all the replies? The questions and conversations? Doesn’t keeping up with the constant fire hose of information drive him batty? Nope. First, he controls his hardware access. “I don’t have a mobile device,” he says. “I have the laptop open at the shop and if I get an e-mail, I can respond. But I step as far away as possible at times.”

Sachs laughs when he adds that he has the e-mail notifications on his social accounts delivered straight to his spam folder. “When I post something, that’s it,” he says. “Unless I come back to that post later for some reason, I don’t see the comment notifications.” He conducts all business via e-mail, partly to ensure a written record of communication and partly because it reduces the channels he has to respond in.

Social, he says, “doesn’t consume anywhere near the entire day. Even with the screen open to the places I haunt, the interaction isn’t as 24-7 as you might think.”

THE ORIGIN OF #ATMO

Sachs’s signature phrase (which, in case you haven’t figured it out, stands for “according to my opinion”) is a ready-made hashtag. It’s at once a brand, a statement, and a joke—a way to skewer people who attempt to display a command of a topic they don’t really have. It’s become inextricably linked to Sachs’s brand, although he tries to limit using it to once or so a post.

“Some people hate it,” he says. “Some think it’s funny and I’ve even had people tell me that they started it.”

That would be according to their opinion.
. 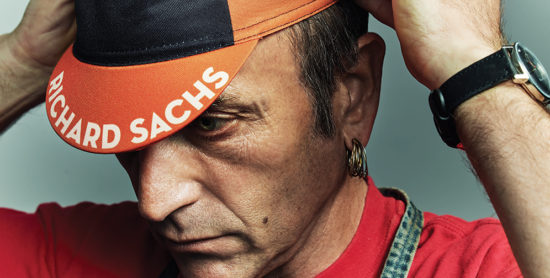 This article was written by Joe Lindsay and originally published in Bicycling.