The most difficult aspect I seem to have is seeing that the
filler hasn’t made it to some part of the shoreline. <cut>

It’s not about seeing, it’s about sensing. It comes eventually.

A solid and completely filled joint is the goal rather than what it looks like. If you focus on brazing the lug to achieve the former, the latter simply falls into place. Trying to self-correct a shoreline, or even paying attention to it as if it alone is the task, will only result in extra passes of the torch as well as prolonged heating cycles.

I’m not very comfortable starting the new year by quoting from the past, but if you don’t go through the steps repeatedly and ad nauseum, not only will the process take longer to realize – it may never come at all. Since you (one…) won’t work in production, make the investment in practice materials, line up 50 lugs and tube sections, start brazing, and take notes. Then do it again atmo. Make the routine a gift you give yourself since you’re essentially your own apprentice.

The above was a reply I gave as part of this long conversation just yesterday, January 1, 2015.
. 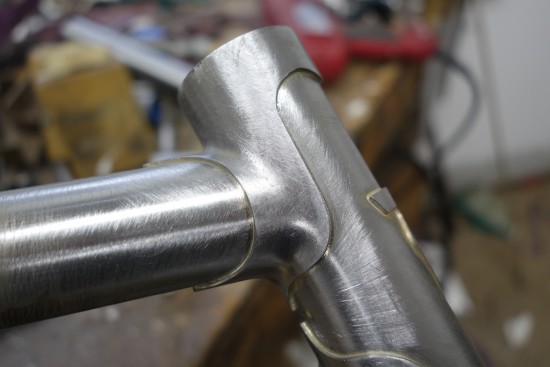