Giving It All Away (Long)

A colleague of mine, J.P. Partland, wrote about the NAHBS show, a most recent iteration of which having just ended last week. I thought his words were spot-on and added mine to a conversation that followed. They were…

“I think it’s a good article, and not at all negative atmo. J.P. is a professional writer and he’s holding up a mirror. Perhaps some don’t like what they see. Some – especially some with no skin in the game – may feel he is condescending, or even judgmental. I don’t. A lot of what he writes IS true despite that some segments would prefer he kept his POVs to himself. I don’t think he’s airing laundry. Or being incendiary. The text is a very good overview of where the niche is now, and how the NAHBS show is part of it.”

As with many articles that go viral, related chat about this one lives on a message board. What follows are some points that stood out. It should be clear that the italicized texts in quote margins are the voices of others, with my replies interspersed. Enjoy –

Can’t say that I totally disagree with the article but I don’t really think there’s anything to ‘complain’ about, I mean, it’s a room full of nice, beautiful bikes, right!?

Criticizing and having a differing opinion is not complaining. The writer was writing. Period.

I’m more interested in a discussion among other framebuilders if there is a way to move the niche forward with or without NAHBS and without the politics and control issues that normally occur.

I don’t think the niche moves forward, show or no show. It’s just the niche. The individuals move forward (or don’t…).

If there’s anything I think a custom builder with years of experience dating from previous ‘eras’ of framebuilding should take away from NAHBS (and the age of the internet photo gallery in general, which NAHBS is a symptom of), it is that the primary challenge for them going forward is going to be communicating what that experience entails.

I don’t know where you have been, but nearly all of us from the pre-Y2K era have been “…communicating what that experience entails” since we got online. The newer builders may have no experience and no numbers in their fingertips to speak of, but they do have one thing that’s invaluable. And it’s all cached online going back to the first listserves and every message board in between. We can’t do the work for them but we’ve certainly articulated every step along the way, shot pictures of it, created how-to pages, mentored all and every business issue that you can imagine, and more. But until a cat has made hundreds and hundreds (and hundreds…) of units, he’ll still be approaching the bench from the left hand side of the developmental time line.

Two years ago I wrote this about NAHBS. Here is a quote from it:

…it seems to me that the culture that has developed around the show creates unfair pressure on framebuilders to exhibit, which in turn is a huge financial strain for most of the builders. The fee for a booth at NAHBS is quite a large sum. Add to that the price of airfare and housing, plus the transport and insurance of numerous expensive bicycles, and the cost of exhibiting quickly adds up to several thousand dollars. Most framebuilders I know – even the “big names” – can hardly make ends meet as it is, and feeling compelled to exhibit at NAHBS every year …makes life more difficult still. While it is true that no one is forcing them to go, there is implicit pressure. With NAHBS positioning itself as the biggest/greatest handmade bicycle show, potential customers who follow all the hyped up coverage start to expect framebuilders to exhibit at NAHBS. It is as if exhibiting in itself is perceived as a sign of industry recognition…

You could certainly write the same post today and be 100 percent spot on. What’s the phrase – sooner or later we become our parents? In a perverse way, and in one no one could have anticipated, the niche has become exactly like J.P. writes about in the text linked in the OP. Some don’t see it. Some don’t like being seen that way. Some don’t possess the filters to see it at all.

I’ll just say that the analogy of show bikes to French couture might be a broken thing.

The fuel of fashion is perfume. Rapha soap notwithstanding, there’s no similar margin product in the bikey world.

None of us in the trade has a Bernard Arnault or a Richemont Group behind us. The fashion designer and scent makers Jorn mentions all exist as window dressing for the brand so that the masses can buy the dumbed down, made-for-the-market versions of what they show on runways and in W Magazine. I dunno how long it’s gonna take for the niche-istas to get it through their collective heads. We are not them.

Also, and by the way…

While I am shedding layers of skin here I’ll add this. It’s a perverse (there’s that word again atmo…) business model that sees or allows folks to spend such a large chunk of their promotional-slash-branding budget on a single broadcast – in some cases, an amount disproportionate to their normal yearly expenses – just to be in a place where all their pals are so that they can talk shop when traffic is slow and then later after hours. The goal is to create awareness and maybe write a little business. But when you get home, if all you have is an order, or maybe several orders, you lost money. If you can’t leave the ordeal and either 1) sell for more money as a result of the goodwill and aura-ness you’ve created or, 2) let your designs be cloned so you can profit from your intellectual property and, er- aura-ness – making it into the mainstream, I hope your last name is Rockefeller atmo. Just having more work isn’t the way to sustain because you still have to do the work. If I have to explain that, I may as well auction off the Vostro.

When I was on the Kurt Kinetic this afternoon I realized something about myself that I’ve never articulated. For all the popping off I do about the trade, for all the advice given, the tough love, the image dumps on Flickr, the press-fleshing at the shows wherever they happen to be, my real motivation isn’t to help folks build a frame. I can explain stuff until I am blue in the face but the receiver still has to do it. My motivation is this: I pop off because I want to see a cat be able to make well designed, beautifully executed, safe (can I please use that word again…), and SAFE bicycle AS WELL AS sustain a business doing this. The latter is inseparable from the former in my mind, and that is why I hit these threads so hard.

And just so the convo doesn’t get completely lost, J.P.’s text still resonates with me.

…And that above, in a nutshell, is teaching and why teaching is hard and not always successful.

Showing and teaching are not the same. For all the explaining I have ever done online or elsewhere, it amounts to the former not the latter. That’s also why I work alone; I can give it all away on my own terms and still have the silence in my shop.

That’s rational, but I’ve always wondered the underlying reasons why. I mean, SAFE is important, and I’m not sure the niche would take liability insurance as seriously as they do if you hadn’t been pounding it for many years now. That all makes sense to me because that’s in a small way (or maybe a big way, who knows) making the world a better place.

We are making vehicles not mechanical watches, perfume, or chocolate. Safe has to be at the top of every list.

But why help some random dude sustain a successful business making genuinely good stuff (and who some would consider to be competition)… that’s an interesting motivational question, to me. But hey, I’m a high school math teacher-cum-teacher trainer–the *why* of teaching is big question to me.

The only competition any of us will have is from ourselves. No, I don’t meant that in some mystical, Mr. Miyagi way. It’s true. No matter how the frames are made, the client is also – if not only – buying our belief system, agenda, and body of work. No two of us share these with anyone else.

You have spent a long time spending lots of time teaching others. I’m fascinated by what makes people (you, in this case) tick like that.

It was the Earl of Granthem who said the words, “We all have different parts to play, and we must all be allowed to play them.“, and I am inclined to feel similarly. You don’t really own something until you are able to give it away. 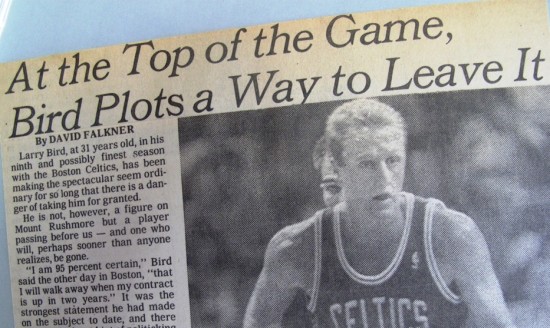