Last Friday marked the grand opening of the beautiful Richard Sachs exhibition which was designed by House Industries at the Rapha Cycle Club NYC, and will run for the upcoming month. The inspirational exhibition walks through the bicycle builder’s personal industrial revolution from his early days as an apprentice to becoming a modern folk hero in the cycling community. The show highlights the balance of tradition and innovation with which Sachs has built a loyal following and profoundly influenced cycling culture worldwide. House Industries, an internationally-recognized graphic, product and type design firm, has been a long-time supporter of the Richard Sachs program and therefore makes for the perfect partner of this inspirational overview.

As a youngster, Richard Sachs could not easily separate his enthusiasm for bicycle racing from the interest he had in the equipment used by the top athletes of the day. With a balance of dedication and perseverance, he pursued his competitive cycling as well as his choice of a framebuilder’s life. His dream of learning to build bicycles that could, one day, rival the machines he so revered led him to spend a year in London as an apprentice to Witcomb Lightweight Cycles. There he would cultivate the basic skills that have become the foundation of his successful career. More than 4 decades have passed, and Richard continues to zealously combine his racing background with his extensive frame building experience which has gained respect as one of the finest builders of custom bicycles in the world.

House Industries has made a considerable impact on the world of design since its foundation. House Industries fonts scream from billboards, wish happy whatever from tens of thousands of greeting cards, serve as the basis for consumer product logos and add elements of style to a wide range of mainstream media. In their rich career, House artists have mastered a large cross-section of design disciplines. House Industries’ work transcends graphic conventions and reaches out to a broad audience. What ultimately shines in the House Industries oeuvre is what always conquers mediocrity: a genuine love for their subject matter, which is clearly underlined in the collaborations with Richard Sachs initiated over the last years, and finally resulting in the amazing exhibition.

Between Richard Sachs, the cyclocross team, his hand-built racing machines and Rapha’s cycling-centric venue, one would be hard pressed to assemble a more positive bicycling atmosphere under one roof—anywhere. 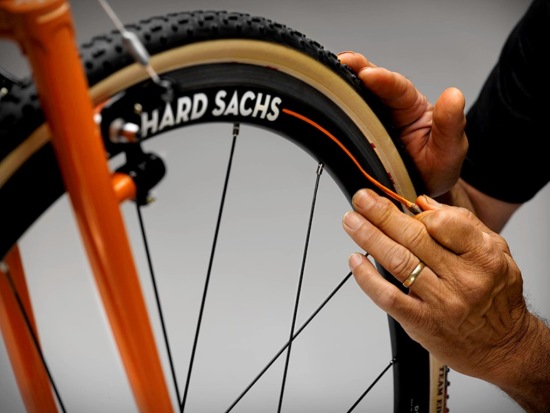 The exhibition will run until September 21st at the Rapha Cycle Club New York located at 64 Gansevoort St.

This article appeared originally on Another Something.