I’ve looked for inspiration and taken cues from outside my industry at least as long as I’ve been in it. I’ve never made a secret of it; bicycles don’t do that much for me. I like using them as well as making them. But thank goodness I keep an open mind regarding what’s past the boundaries of our niche. If I had to rely on the bicycle trade for motivation to drive myself forward, I’d have walked in traffic when Reagan was in office.

I’m a lifelong clipper. It’s something I started doing at The Peddie School in 1969. Few magazines or newspapers are safe near me. I’ll tear out complete articles, a paragraph, or even a single thought if it stares back at me long enough. I have drawers, no – boxes full of these. And even when the words are removed from their source, or considered out of context, they still resonates with me.

During a recent personal leave from work I caught up on the magazines and newspapers that I missed. The image shows two clips, disparate thoughts from articles having nothing to do with each other. But they looked back at me, and became victims of my scissors, dull as they are.

Most of my material comes from fashion and design, but there are texts about the hospitality and restaurant industries, with a mix from the craft and also luxury goods markets. When I see something presented well, I perk up. I want some of that energy for my own. Clipping allows me the chance to grab a thought, let it percolate, and then distill it down into something that will help keep my interest in frame building that much longer.

A common theme is that it’s always about a person or brand sweating a detail. That matters to me. And if you’re interested in some details, the top clip is from an article about the new Fendi hotel in Rome, while the bottom is a thought taken from a recent restaurant review in The New Yorker. 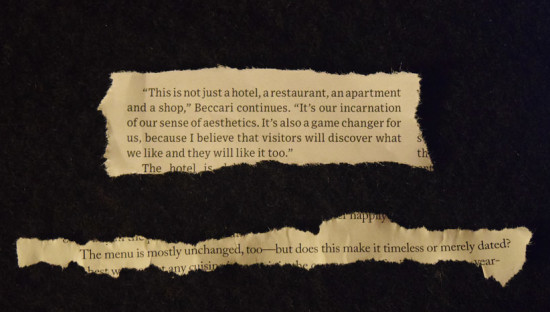