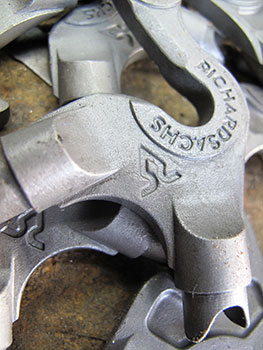 few of us will have recourse, or perhaps the need, to being owners of bespoke bicycles, lovingly hand-crafted on our behalf, usually from the finest steels, intended to benefit not only our riding pleasure, but usually that of our sense of the aesthetic. if i might quote from richard sachs:

“in the current climate, the value of a custom frame is lessened by the very fact that bicycles that come from the larger manufacturers are so well made, much more competitively priced, so well designed, and so well received by dint of racing successes (among other things…), that the need for a buyer to pursue a custom bicycle as the be-all-end-all of his purchases is not what it once was.”

it may be that richard is simply too modest for his own good, that he is less than mindful of the reasons many of his customers are willing to sit and wait for a good few years before receiving the product of his labours. if i were to enquire as to how many of those reading would be willing to swap their current bicycle for a sachs, i figure it would be a time-consuming task to count the raised hands. however, richard’s less than sentimental approach to his hard-won skills and beautiful red bicycles may not be entirely misplaced in a modern world increasingly concerned with economics and profit margins.

there will always be room for those with money to spend and status to enhance. it would be a foolish man who chose to vet the motives of his customers before deciding whether to pander to their desires. building a frame for someone with no real appreciation of value is no less a task than for one who understands every lug shape and tube profile. 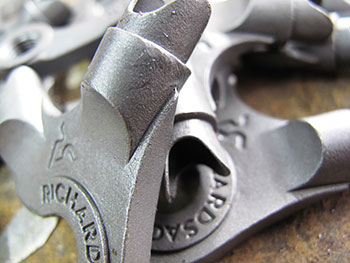 those of us for whom the phrase ‘steel is real’ not only has appeal, but underpins the often nostalgic appreciation of our obsession are entitled to our opinion. however, it should be noted that many a modern day framebuilder continues with this ferrous material simply because that is the very one that constituted not only the bulk of their initial training, but the majority of their working life. it is unlikely that the financial rewards for builders such as richard sachs, sacha white, tony pereira and their peers, allows the time and luxury to explore more contemporary elements. we may have raised the level of those red bicycles to that of art, but for richard it is a means to earn a living.

be that as it may, those modern materials employed by the corporates can provide us with bicycles and components we could scarcely have dreamt of only ten or so years ago, and often at prices that are not too outlandish. economies of scale and sometimes the closest to mass production that the cycle industry can achieve, provide not only coroporate profits but battle steeds for the weekend warriors. such economies of scale, however, have a detrimental effect on the one-man and his lathe, accompanied only by a brazing rod and a radio by the window. 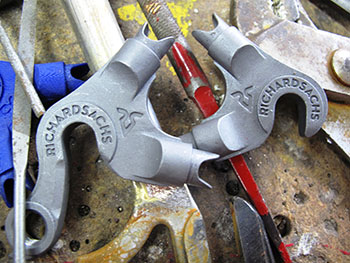 in the days when everyone built with steel, the necessary facilitation of such was a global industry. lugs, dropouts and tubing were in plentiful supply, with variations that allowed an impressive degree of individualism on the end product. add a custom paint scheme, occasional flashes of chrome and one’s pride and joy could conceivably stand out from all those occupying the bike racks surrounding it. times have changed; aluminium started the process, and carbon effectively put the boot in. those who previously proffered several tubing profiles and a wide variation of dropout choice, turned their efforts to alternatives when the market diminished below the point of appropriate economic return.

those for whom there was little alternative or desire but to continue improving the fortunes of the steel bicycle frame, were often left considering their fate. hand cutting lugs and dropouts is a lengthy and laborious affair, detracting from the principal job at hand; making fine, bespoke bicycle frames. 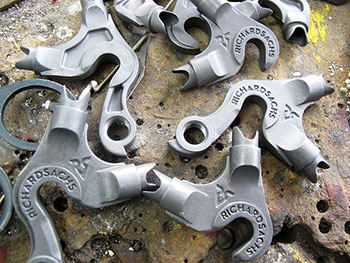 not everyone, however, is resigned to having such opportunity removed from their personal, or that of their fellow builders’ chosen career. if i may again quote from mr sachs “I decided to become a player rather than get played”. to this end, and not for the first time, richard has added a set of cast components that will allow not only the continuation of richard sachs bicycle frames, but also those of his peers, should they wish to avail themselves of his ingenuity. “Ten years, five lug sets, two fork crowns, two bottom bracket shells, some braze-ons, and a tube set or three later, I’m happy to add another clue to the treasure hunt. These new RS Piccoli Gioielli dropouts are in production and will be added to the above list so that that all of us can enjoy a wider range of parts with which to assemble our frames.”

in the grand scheme of things, those of us with more than a couple of carbon frames sitting in the bikeshed probably won’t notice much difference. and to be perfectly honest, those who will never own a bespoke steel frame of any flavour, will be oblivious to any variation in the space-time continuum. nonetheless, it matters, and it matters a great deal. not because it’s richard sachs, and not because the steel bicycle has to survive at all costs, nor because of richard’s apparent lack of sentiment towards those red steel frames of his.

it matters because someone has had not only the foresight to see the onrush of inevitability, but the pragmatism to do something about it before the player becomes the played. a degree of individuality has been preserved.

and those little jewels are small, but perfectly formed.