My Last Custom Made Frame

You typically use 8cm of bottom bracket drop, which especially with skinny race wheels means a low bottom bracket. Were you doing that from the start or what influenced you to go that low in the bottom bracket?

Let me be specific. I don’t really make custom frames. I design and make frames that I think are the best for the people ordering them. In the beginning of my career I had a unique situation whereby many of my clients were National Team members as well as others knocking on the door. This, from my being part of the racing community since before I was even in the industry. To a rider, these folks always asked for something that was comfortable and stable. I bookmarked that and I thought this distinction is really odd because people that I am making the bikes for that are racing on the national level, and they want bikes that, by Bicycling Magazine standards of the day, were not “racing bicycles”. They wanted the bikes to be, all summed up, longer and lower. This was 180 degrees from how the bike journalists of the day said racing bikes should be.

I think the line in the sand came when one of my clients, Rudy Sroka, who was also a good friend of mine, was on the first American team to be invited to the Tour de L’Avenir, which for those who don’t know, is (was, at the time…) the amateur Tour de France. He ordered a bicycle frame that was 76 degrees parallel, with an 11 inch bottom bracket, the shortest chainstays possible, and a minimum fork rake. I made the bike because I thought that, “Well, bike makers make bikes to order and this is what Rudy asked for.” He was my pal and an accomplished racer, and I figured, well I’m not going to argue. The bike looked great; you couldn’t tell from the side that it was queer. It was what he wanted. He had enormous success on it domestically, but when he went to the Tour de L’Avenir, which was his first taste of European stage racing, he lasted three or four days. The team manager, Mike Neel, said to him, “If you ever get invited back to Europe to represent America in the stage races, don’t bring that bike.” Or, maybe it was, “If you ever find out I’m the coach for your next trip abroad, don’t bring that bike.”

Rudy related that story to me and at that point I said to myself, “That’s it.” None of this stuff ever made sense to me. I didn’t know how to say no to paying clients. The odd juxtaposition was that I was still getting feedback from some non racing ones that said they liked their bikes the other way (with the inane geometry du jour). The real racers and the National Team guys all wanted it to be this way, as in more rationally designed. I went with my instincts. I stopped making bikes to order and I decided to use my experience from the sport and say, “Look — there are two people in this equation, and I know more about the design than you do. I will design the bike to fit you perfectly. The result of this will be based on what I think will be correct for a bike.” Rudy’s was the last frame order I filled in which the client spec-ed the geometry and the key numbers. In other words, from the beginning I thought many of the so-called custom frame orders were coming through with requests for design elements that were contradictory with good handling and balance, and the incident with Rudy and his Tour de L’Avenir experience galvanized my decision to, once and for all, make my frames my way.

And, oh – the 8cm drop question? There’s really not that much to it atmo. Back in the 1970s, Rudy and I had a team mate, Lans, who is mentioned in the letter below. Lans was a commercial photographer and on the staff of Gourmet Magazine. His portfolio included many cover stories as well as the images on the zine’s covers. His assignments took him all over the world. Lans was also a true bicycle connoisseur and appreciator years before others began looking at them as objects of beauty, collectibles, and things to fetishize over. All of his were always nicely assembled and well maintained with an attention to detail that would be at home at the Pebble Beach Concours d’Elegance. I remember once Lans and I were looking at a bicycle and he remarked that the line of the chainstay as it left the shell on its way to the rear dropouts formed a beautiful angle. Having never focused on it that way I started to notice it more and more. Somehow I made the connection that the lower the bicycle’s center of gravity (more frame drop…), the more accentuated the angle of the chainstay became. At some point, I concluded the a standard 8cm drop produced a lovely angle to behold. I made it a consistent measurement on all frames going forward. No science. No analysis. Not even any “road testing“. The choice is rooted in one thing, and that one thing is rooted in Lans’ keen eye for beauty. I am fortunate he shared it with me. 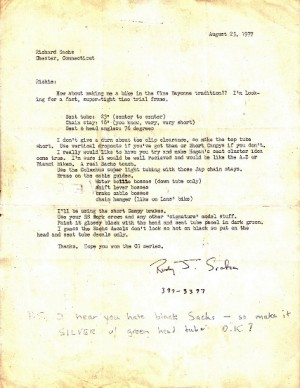 « For My Consideration
The Break of a Lifetime »