After a decade at the workbench, nothing in my trade inspired me. By the early 1980s, I was already restless and bored. Then I saw a film on a local PBS affiliate about a luthier. It was called The New Yorker Special, Handcrafting a Guitar. The storyline chronicles James D’Aquisto’s apprenticeship, his interaction with mentor John D’Angelico, and how his own brand begins when the older man dies and unexpectedly leaves the younger man alone in the shop. For a brief period, his guitar making continues in the D’Angelico tradition. Working through old orders, and with clients who want something fabricated in the style of his deceased mentor, D’Aquisto ultimately finds his own voice.

The film is peppered with shop images, historical information, and conversations between D’Aquisto and clients. One of them, Jim Hall, is seen playing at The Village Vanguard. While we hear the music, the camera focuses on the maker sitting in the audience. The melody is delicious, but the smile on D’Aquisto’s face even more so. His look of enjoyment and pride steals the scene.

I’ve borrowed and stolen a lot from this 30 minute film, and watched it many times during the last three decades. More than anything, it illustrates a reverence and respect shown for the tool (guitar), the process, and history of lutherie that I’ve rarely observed in my own trade. And I’d be remiss if I didn’t acknowledge James D’Aquisto and his business as unwitting models for how I approach my work and my workbench.

The path that some once walked is not often taken anymore. It’s a shame we live in times when folks won’t get the experience first and then transition from where they received it to where they go next. D’Aquisto had a twelve year apprenticeship, not a two week course. People wake up one day, go to a seminar the next, blog about it, and then try to make a market. It doesn’t work that way. Before you can have a present, you have to have a past. And there’s no app for a past. 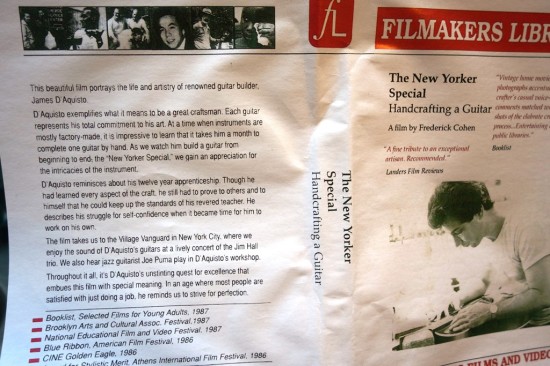