It’s funny what time will do to you when you let it pass. I’d be fooling myself if I believed I was an industry veteran despite standing at the bench for nearly 40 years. To roll it back a moment, I still see myself as the 18 year old who sidestepped some obstacles along the way and found myself in London by 1972. That I did a stint at the frame shop there, came back to the States and did a shop stint here, and then walked away from it all to fulfill a desire to 1) see my own names on the bicycles, and 2) be (finally) accountable to no one but myself – these seem like a single moment that has never ended. Decades have passed and I still see myself through this lens.

I consider a framebuilder not someone who makes a frame, but a person who has made it to the other side. Many new folks are enthusiastic, are good craftsmen, have ideals that include a desire to save the world by making yet another lugged frame, or want to pay homage to a place in time they fantasize about. I see a bigger picture. A bicycle is a sporting good, and its frame has to be designed well, allow its user to assimilate an efficient position, and its aesthetic should please the maker, the owner, or both. Folks might look at my business model and assume that I make frames the old fashioned way. The polar opposite would be closer to the truth. My focus at the bench requires me to leave the past behind rather than recreate it. To that end, I try to improve the material I work with. I encourage its producers to make new products for the 21st Century framebuilder so that we are not using dead stock and old designs. When some parts no longer were available, I took a leap of faith and made my own.

By the 1990s, many of the framebuilders who toiled at benches, the brands they grandfathered in, and a complete layer of cycling history began to vaporize. Nearly all the men I think of as having preceded me didn’t so much finish their careers as much as they parlayed them into larger commercial endeavors, or simply gave up. There was no middle ground for folks who were once at the vanguard of the industry and who were suppliers to the top sportsmen in the arena of competition. Fate had ushered in ways to produce bicycles that could rival those that were once made only by hand, and by the hands of framebuilders who had grown old and could no longer roll in a world populated by big business.

I want to help people interested in the framebuilding understand that the bicycle, the sport, and even the market offers us a history that should be respected. It seems like the Internet era peeps found it by crawling through a completely different window than the one I opened four decades ago. Either by fate or by fault I am one of the few from an earlier era to still be here, and who has endured in spite of all the distractions. If you paid attention since Y2K you’d agree that, in many cases, the desire to make bicycle frames became a full time hobby for many – it almost mirrored craft beer making and coffee bean roasting and other noble pursuits to co-opt smallness in a world full of industrial-made goods. I don’t make beer nor do I roast coffee beans, but I regularly opine about framebuilding as a career. And, clinging to the to the “life as a framebuilder…” theme, I’m often asked about the path and/or involved in conversations about it.

These are interesting times atmo. I still see myself as someone who started a life in this and who still is trying make sense of it all. Folks on the left side of the developmental time-line see me as a veteran, or a survivor. This tends to put me more in the position of being the asked, rather than the one asking. When someone wants to do “this” now, in the 21st Century, most of the lessons and primers come from online forums, email lists, and Flickr pages. Folks are learning to do what they do from the efforts of others doing similarly. It’s condescending of me to have that POV, and i don’t mean it with any hate attached; it’s simply how I see it from the cheap seats. In the middle of it all, my place in the conversations continues. I am one of those often asked where to begin, or how to forge ahead, and also how to endure.

I didn’t set out to be a framebuilder; I became one after time had passed – much time. I reckon I assembled hundreds of frames before I even thought to start a brand with my name on the down tube. And even after a decade passed and I had near to 1,000 frames made, it still felt new and uncharted. At the point I realized that, indeed, I was in this for the duration, I began to listen even more closely to those in front of me, study their productions, read their histories, and take from all of it the inspiration needed to get me through periods of doubt and varying levels of self-esteem. I simultaneously had blinders on to keep me from knowing or caring about what might be in my way, while keeping one eye on all those who (and all that) preceded me.

The days of getting a gig in the trade and learning at the benches of others are pretty much relegated to history. My humble beginnings came from moving abroad at age 18, and camping out at a framebuilding shop rather than at the knee of another framebuilder. I have concluded that you can’t learn much from someone whose pace and output has slowed, and whose every unit is different from what came before it. There’s no continuity or consistency to that model. And even if it does exist somewhere, it comes at the expense of the framebuilder and those patiently waiting in his queue. In the small one-man one frame shops that many of us run, the maker can show you what he does, but teaching you is another thing entirely. Many of us give back, or mentor, or paste build sequence pictures on host sites, or answer emails and questions online. We all share. We share to the point of being enablers to those now trying to make a leap. A leap to what is a good question.

I am one of the bad guys who say it’s a rare cat who can do this, and make it a career in this climate. But i still am a share-er. Depending on how I reply, or take part in a thread, I can be construed as a person who says it can’t be done. I can live with that characterization. I share my experiences nonetheless. The one difference I sense between how folks ask now and how I asked then is that the present day conversations consist largely of folks who, when they don’t like an answer, or don’t get the one they want, (they) either leave mad, rephrase it to elicit what they want to hear, or keep asking until someone else replies to their satisfaction. When I was doing the asking, the replies consumed my very being and became life lessons. Whether the issues were about materials, trends, how-to’s, the sport, design, style, and all things in between, I was a sponge. And, to return to a moment of near-condescension, these days folks want to know about something and won’t be satisfied unless there’s an downloadable app for it. Okay, tucking claws back in…

Last night I was wrestling with all of these thoughts and tried to find ways to articulate them without using analogies and metaphors. But that didn’t stop me from considering tapping popular culture. The thing is this atmo: building a frame does not make you a framebuilder. But in 2012 how does one connect the dots? Think Karate Kid. The boy in the film wants something that Mister Miyagi has, and that something – even if it’s still a work in progress for Mister Miyagi – took a lifetime to acquire. The way to get it from one source and make it your own is by paying attention. In framebuilding jargon I think of it as the three R’s: Repetition, Routine, and Relentlessness. Pay attention to what others are offering up. Take what you can from them. Don’t dismiss what you don’t like hearing simply because you don’t have a nice, tidy compartment in which to store it. All lessons are good. Lather, rinse, repeat.

Today’s ask-ers, for the most part, want to have a peek in the window to see what’s in the room. Some actually want to get in there and touch the back wall, and will. But to get there, don’t go around the person answering you, go through him. 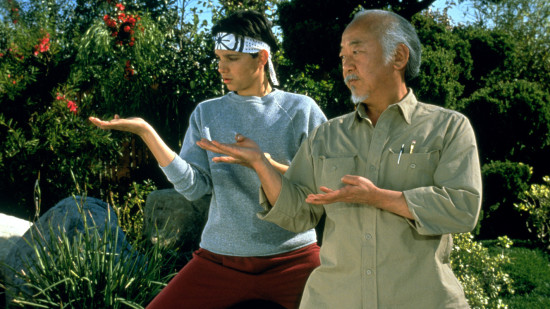