Richard Sachs Is The Bike Whisperer

“What drew me in was the combination of a beautiful sport with beautiful bikes. They spoke to me, and they were used for racing.” These are the words of the immortal Richard Sachs, one of the 29 bicycle artisans featured in the new book The Elite Bicycle.

When the name “Richard Sachs” is uttered, a number of images are called to mind. Perhaps one of those is of a crotchety Dickens character with a particular distaste for the holidays. But, believe it or not, there’s more to this bicycle builder than meets the eye.

Let The Elite Bicycle paint a different picture of Richard Sachs for you. Once upon a time, a teenage boy destined for a career in writing and journalism, constantly found himself in the treasure trove that was Kopp’s Cycles near Princeton. Trip after trip to this bicycle haven, young Richard Sachs eyed the two-wheeled machines like a kid in a candy store. Having been smitten with bike racing for some time, a hankering grew for the sleek machine, the goblin-silver components, the wheels, so frail in look, but so strong in use.

Unable to deny his feelings for the bicycles, he made his way to Manhattan, searching for a position with a bicycle mechanic. But his search led him much farther away than The Big Apple. It led him across the ocean to Britain to labor without pay in return for training.

Sachs landed at Witcomb Lightweight Cycles in Deptford, by the Thames, where the diarist John Evelyn grew lettuce all year round, near the shipyard where Peter the Great of Russia learned to build vessels for his navy, and where Ferranti lit The Light (the power system) with his new system of electricity. And it was here that the 18-year-old Sachs devoted his life to bicycle building.

The Witcomb environment taught Sachs a lot of things. He developed an undeniably profound bond with bikes that perhaps only a few will ever understand. Accord to him, “If you can’t feel, discern, use intuition, or listen to the material, all the quality checks and dial indications in the world will add misery to the process.”

For Sachs, that process now takes place in a spotless, white-painted workshop, amply lit by natural light. It’s situated not far from the Connecticut River, in a Thoreau-esque, New England, backwoods retreat. He functions best in silence and solitude. Silence carries “the sound of my own thoughts,” he says, “I can hear my own voice clearly without interruption. When I work alone, it’s me, the metal, and the heat, and we work out this little passion play between us.” 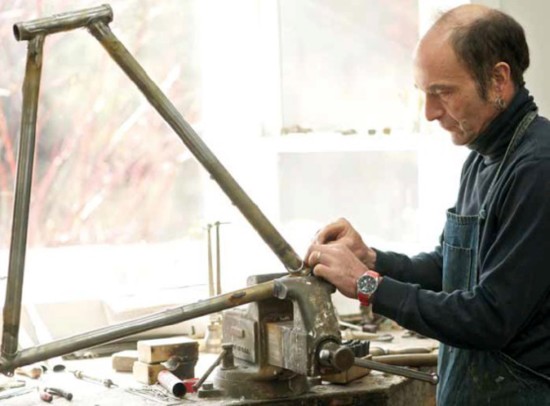 This brief portrait of Richard Sachs Cycles was adapted from its full chapter in the new book The Elite Bicycle.