World-renowned frame-builder Richard Sachs is back for his ninth consecutive NAHBS.

For 2103, all three of Richard Sachs’ bikes on display are built using 100% Richard Sachs tubes, lugs, and dropouts. This is the culmination of his long-term vision to provide a full range of frame parts for lugged steel frame-builders, going back to 2002 when he introduced his first set of modern era investment cast parts, the Richie-issimo series of lugs, fork crown, and bottom bracket shell.

Sachs notes, “These are 21st century frame building materials. I’ve fine-tuned each part over the years to offer more beauty and precision. The tubes are modern and ongoing refinements have resulting in materials that allow framebuilders to build high-performance bikes at modern weights.”

Standing as the centerpiece of his booth in Denver is the first Sax Max ÜOS (Über-Over-Sized) bike Richard built. It is a deep and glimmering candy apple red. On the color, Sachs notes, “The paint was done by Joe Bell; he [paints] all of my bikes. What’s interesting is that all three of these bikes [on display] use the exact same red topcoat. It’s the undercoats that make them different.”

Sachs has sponsored bicycle racing teams for more than 30 years, including his own RGM Watches-Richard Sachs Cyclocross Team. So it was no surprise that Sachs turned toward the displayed cyclocross bike and subtly changed our discussion to bicycle racing. He humbly pointed out that it’s been relationships with sponsors that have helped him continue supporting racers and the sport. “You’ll see that all of my bikes on display use SRAM components, Cole wheels, Challenge tires, and parts from Zipp, Connex, and Cane Creek. Without the support of my sponsors it would be difficult to keep the racing team going.”

In fact, no sponsor in the world can claim longer support for bicycle racing teams than Richard Sachs himself – evidenced by the long row of unique team jerseys lined up across the backdrop of his booth. 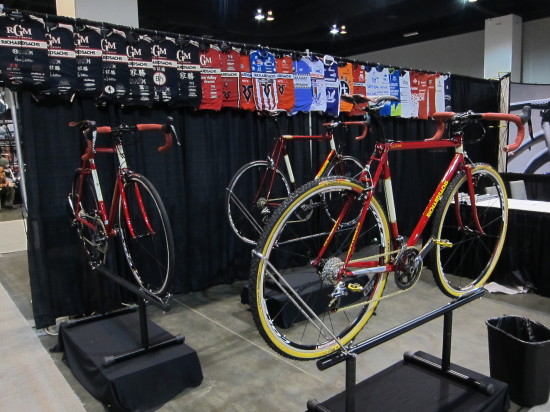