I often emphasize the importance of having a relationship with the sport in order to improve what you do at the bench. Heck, I’m evangelical about it, to the point of not understanding how anyone can make bicycle frames without the experience of pinning on a number. Better yet, to have others who also can also test your designs and help you distill choices so only one is left – the correct one.

The other day I received a note from Bill Farrell, inventor of The Fit Kit. I first met Bill in 1971 when I lived in Vermont. I raced locally, and he was part of a huge paradigm shift that some U.S. Ski Team members were making into cycling. Many of the top results from that era came from these folks who “discovered” cycling and used it as cross-training for their own sport.

After I returned from London and started my own brand, I reconnected with Bill. We became pals, team mates, and he was also a client. One of the pleasures that passing years brings is that you can look back and revisit experiences shared, wonder where the years went, and remember it all as if time has stood still.
.

A few years ago, I heard this story from Peter Imhoff, a trustee at the Dublin School.

I met this farmer in Chesham, New Hampshire. He showed me his ax and said that his grandfather gave it to him back in 1957. He went on to say that he had to replace the handle three times and the ax head twice but it remains the best tool that he ever had and he continues to cherish it and intends to pass it down to his grandson.

As I listened to Peter tell this story, I reflected on the frame that you built for me in 1981. Upon getting it, I forgot to adjust the medial restriction bolt on the derailleur and over-shifted and snapped the hanger. Within a week you had replaced the Campagnolo dropout with a Shimano one, resprayed the frame, and shipped it back.

A few months later, I went down in the last turn at Fitchburg and destroyed the left chainstay. Once again you replace more tubing, installed another dropout, resprayed the frame again, and once again it came back like new.

A few years passed and in the last 50 meters of the Salem Witches Cup I saw some daylight between Paul Curley and the crowd barriers and tried to get through. It didn’t happen and I ended up in a tangled mess of of tubing. The down tube and top tube of my frame had broken. Again, you replaced the tubing, resprayed the frame a third time, and in a few weeks I was back on the road.

The frame came from Jack Nash at Onion River Sports. I was having a very difficult time getting a frame to fit me correctly back then. Shimano had issued Dynamic Drive crank and pedal systems to the Stowe team and because I had a proportionately long torso, the lowered pedal height of the Dyna Drive pedals required my seat to be set too low with my existing Rauler frame.

I was very happy with my current size set up using traditional Shimano cranks and Campy track pedals. When I consulted you with my concern, you responded by saying, “Bill, why don’t you stay with what you feel comfortable with. Your bike doesn’t know or even care about what you’re using for cranks and pedals.” You then went on to build me the frame with a 55.7cm seat tube with a 56cm top tube.

This frame actually triggered the genesis for The Fit Kit. Once I’d developed the R.A.D. Alignment devices, I began to collect data for frames based on the Shimano Dyna Drive and traditional cranks.

Many years later I handed the Richard Sachs bicycle over to my son and he continued to ride it.

Like the Chesham farmer’s ax, it is still the best “tool” I ever had. 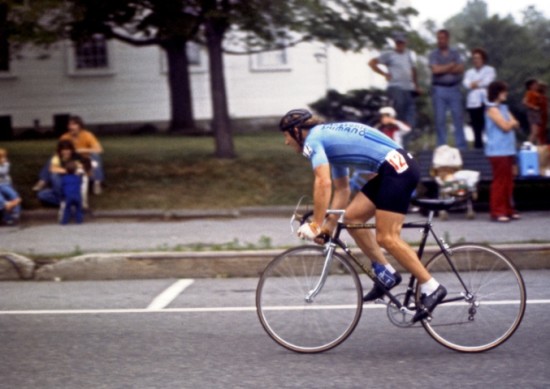