Continuing on yesterday’s theme, here’s a 4 X 5 from 1982 taken by Ken (sorry but I forgot the last name). Ken’s studio was on Union Square right above The Underground and almost directly across from Paragon Sporting Goods. This shoot was my first ever time under real lights and by a real shooter. It also was part of the launch for the then new RS logo and several other identity program changes that came at the same time. We did a couple of bicycles, a layout of three frames, and then did each frame on its own. I’ll post them here someday.

The bicycle was stunning in its time. Columbus tubing, Nervex Ref 32 lugs, full Campagnolo Super Record, Cinelli VIP with my name pantographed in the stem. The good stuff. The tires look a little wonked on this image and I think we shot a test pattern when the unit was being held with some used wheels.

This is a photograph that I took of the transparency by holding it up to the sky and pulling the trigger. Someday I may get a scanner. But this is cooler. More organic. Holistic. Elegant. And honest.
. 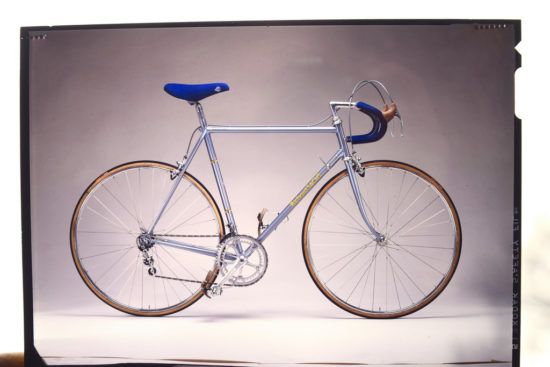