For a framebuilder working in an industry that is decidedly nonferrous, it’s a gift to have allies. Our community has such an ally in Columbus, the renowned maker of steel tubing based in Italy. I have been a client of the firm since the 1970s and some four decades later, I feel closer to the brand than ever.

Some seven years ago, a collaboration between Dario Pegoretti and myself resulted in Columbus manufacturing its first set of over-sized steel tubes targeted primarily at makers of hand-made racing bicycles for whom lugs were the joining method of choice. Spirit For Lugs, a.k.a. PegoRichie tubing, became a reality in 2006 and has since become part of the vernacular. The material is used by the best framebuilders in North America as well as from around the world. For the past year and a half, I have been working with the engineers at Columbus to remake this set of tubes in such a way that the demand for even larger sizes could be accommodated. Whether it’s about rigidity, the market, or fashion, or all three, the goal was to take what we have and grow it.

For 2012, we now have Spirit For Lugs in ÜOS dimensions. The Über OverSize PegoRichie tube set is for framebuilders whose processes or style includes choosing lugs as a way to connect the pipes. The ÜOS PegoRichie material allows you to fabricate a classic frame that’s 21st century light and has all the technical, aesthetic, and emotional attributes that clients expect from a framebuilder who chooses steel. Über OverSize PegoRichie is for those who work in the traditional manner to make modern and compromise-free racing bicycles in an era when most other frames come out of a mold and from a far away land.

To complete the ÜOS project, we also revisited the fork material. While it is common to choose an industry supplied part to hold the front wheel, some framebuilders still prefer to make the fork. In conjunction with the Über OverSize PegoRichie tube set, Columbus will produce a new blade dimension that best complements the ÜOS concept. For those in the niche who prefer to maintain complete control of their manufacture , we now have ÜOS 27mm fork blades that can be paired with a lightweight 28.6mm steel steerer. The new fork parts alone represent what might be the single biggest improvement in materials for our niche in the last two decades. When the Über OverSize PegoRichie frame and fork parts are used together, this set becomes a real game changer for all those making, buying, and competing on hand-made steel frames. All of the ÜOS parts are made for framebuilders rather than for BMPs (bicycles of mass production). The same care that each of us takes when we fabricate our frames can be found in the design and manufacture of these new materials supplied by our ally, Columbus. Two years ago this was a dream. Today it’s here for all of us to embrace. 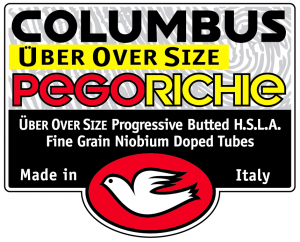