As I prepare for the 2012 North American Handmade Bicycle Show, I am reminded of one thing: I have little in common with the concept of organization. As much as I think of myself running a tight program, it only takes one look at this set of pictures I sent to Flickr to realize I’m no John Pawson. And that my studio (the one I often refer to as my atelier) is a workshop. And that, for as many times as I have cleaned it up for a photo shoot and considered the results as the way this place always looks, I am a slob. The bicycles get made. The correspondence is corresponded to. The business is transacted. But despite that folks who visit and get to see a space that, in pictures, looks like a print shop or an environment that begs the question, “Which way to radiology”, the shop is otherwise usually a mess.

Pal Des once remarked that my work area reminded him of images he saw that showed the studio of the artist, Francis Bacon. When that conversation took place, I knew of the artist by name but had no reason to know why Des made the connection. After searching for matches online, it became apparent why the comparison was made. Have a quick look at this homage to walking entropy. He worked in color. I work in steel. And neither of us seems to have grasped the concept of putting the tool back in its place after you use it, or similar.

For years I was in denial about my work habits. I always wanted to leave them thinking that the white space where all the bicycles came from was – well, I know I’ll get crap for this – but I always wanted folks to believe the environment in which these are made resembles a temple. Maybe because I’m in the fourth decade at the bench, and my life is in transition – maybe I have stopped caring about what folks think. I am in the bicycle business, after all. I get paid for making and delivering finely crafted, precision made racing bicycles. No one is commissioning me for a job as a Nanny. And folks don’t size me up as if I may become their son-in-law. I make bicycles. I don’t do windows.

The Flickr set shows some fifty images of what my shop looks like today, in the second week of February. I still await delivery of two more frames from the paint shop so I can assemble them, disassemble them, and then box the whole lot for shipping to Sacramento in time for the NAHBS set up day. With hope, by this weekend, all of these tasks will be complete. On Monday, I plan to transform what’s left here into a Zen garden. 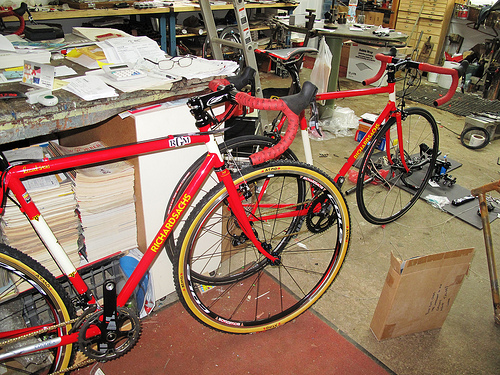 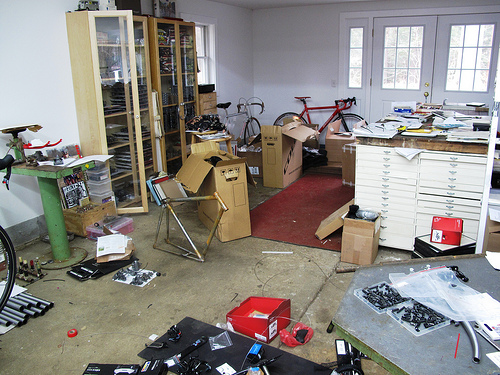