Why Am I Here?

There has to be a reason one goes to work every day, especially every day over a period that spans decades.  Getting a paycheck might be a good answer but it’s not mine. When your work is inextricably linked with your life’s work, you have the gift of doing what you want to do, even if it’s also how you earn a living. That gift was given to me.

I entered my trade by complete accident. While waiting to commence college, I applied for a job as a bicycle mechanic, a position for which I was under-qualified for anyway. And I was turned down. In retaliation, I decided that if I couldn’t fix bicycles for the shop whose classified ad I had answered, I’d find a way to make bicycles in order to redeem myself in the face of rejection. I ended up in London at a bicycle maker’s shop and stayed for almost a year. I have been making bicycles ever since. Mine is a job that began when I reacted to a situation rather than a job I wanted, planned for, and grabbed.  I became a bicycle maker. It has been my work and my life’s work for over forty years.

It has taken me almost as long to realize why I am here. Early on I questioned nothing; I was here because it was where fate took me. When I reconciled that my new life replaced the one that ended when I flew to England, I told myself – by that time a young bicycle racer – that we all need something to do between events, and making bicycles is how I spent my work week. Somewhere in the middle of it all I bounced back and forth with more cerebral reasons. There was a part of me that forged ahead as a way to erase the gaffes, miscues, and blunders one makes in the early years – ya’ know, the desire to leave a better legacy thing that a craftsman innately feels. And there were the later years when, being content with my intuition, my skills, and hand-eye coordination, I could finally accept the work for its own sake rather than obsess about any single part of it.

Why am I here? The bicycle making is easy. Running a business as a bicycle maker is easy. The easy came, finally, after decades of trying – but it came. I am here for other reasons. I am here to keep a window cracked so that someone else – maybe several folks (who knows, maybe many…) – can have a place to land if this trade picks him, either deliberately or by serendipity. My role is to keep the table set for whoever arrives next. 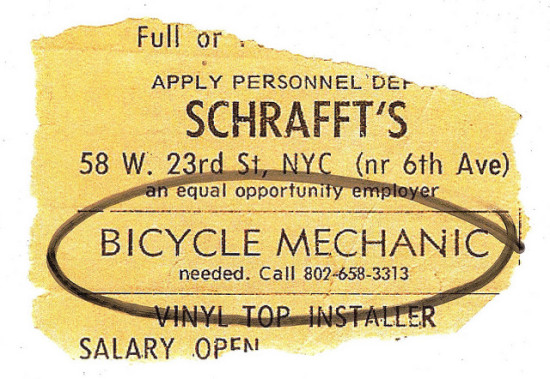