The word deadline has a special meaning in framebuilding. And while I didn’t plan my career or even foresee the little corner of the world I’d end up in, I knew that if I did stay in the trade – if I had to do this for money – I was going to steal from the best. These included the experienced, the well-connected, the artistes, and even those doing superb work yet who toiled in anonymity. It was from these masters that I would learn.

Whether it’s a gas strike, the common cold, spending half of May following the Giro, falling behind due to needy clients who monopolize their time, or simply losing the muse at just the right time to hit the beach, or to make tee time at the country club, framebuilders can find a way to forget that folks are waiting. Or invent one. It’s the totally pro thing to do. It’s part of the job atmo.

When I ordered my second of three Hurlows, letters like these became routine. Some were handwritten, though most were typed. I saved them all. It never occurred to me that a delivery date was something set in stone. I wanted what I wanted, and the man with whom I had a commission was the only person who could fill my need. Bill Hurlow had the franchise on his own work; as do we all if we stand around long enough.

What’s that caption on the cartoon in The New Yorker? “No, Thursday’s out. How about never – is never good for you?”
. 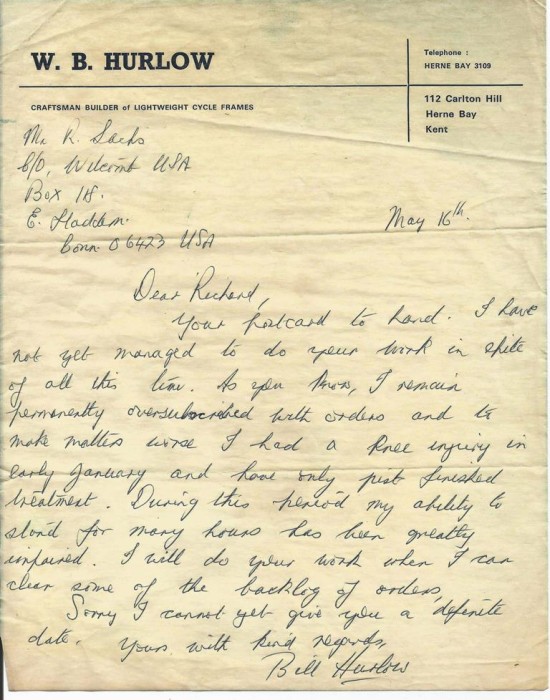