I’ve always been obsessed with order and information. I think that’s why I’ve collected things through the years. And kept records. And I kept records of the records. When I started my business in 1975, what I knew most was that I was free to make my own frames, with no one to lean on. Writing things down was a way to create my own little jewel of a world and control every aspect of it.

I may have had a decent send up having worked with the Witcomb family in London and then at Witcomb USA in East Haddam. I could make frames and fill orders. Running a business, however, was uncharted territory.

I wasn’t going to compromise on anything, knowingly at least. That extended well past the workbench and into my office – which happened to be wherever I was sitting with pen and paper. I wrote everything down. In three places. When invoices were created, they were made in duplicate, and then the notes they contained were transcribed into spiral pads so that, should one pile go missing or up in flames, there were backups. I was the CEO of the Checks & Balances Society of Myself.

Pictured below are some of the transactions from my first few months of business. There’s a $20 charge to Mike Hogan for a Super Record headset. A $35 paint job for Ted Pená. Six sets of Dubois lugs at $3.50 per to God only knows who! And on the 16th of February, my first ever RS frame sale at $185 to Manuel Garza for his dad, Jaimé. That was special. The Garzas owned the Mexican factory that made Benotto bicycles. 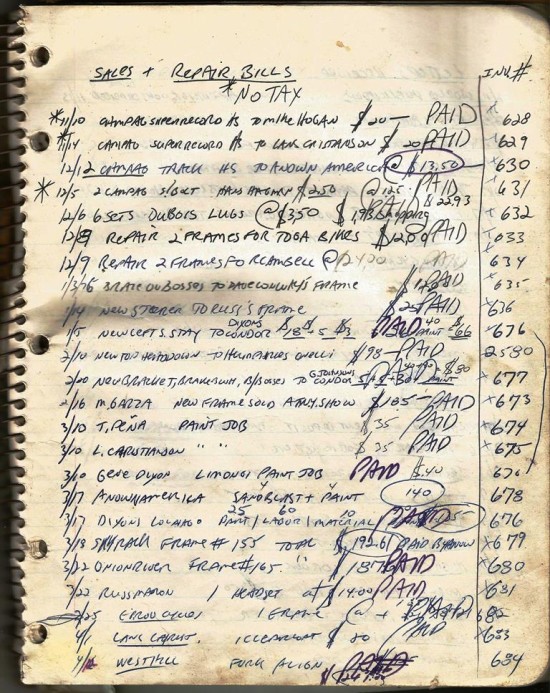