When I started Richard Sachs Cycles I had a built in clientele from having already been part of the racing scene in New England. Many frames were going to folks I lined up against. Others went to people who ordered them from the network of shops I sold through. I don’t remember struggling much when I opened. As a new business owner, I was happy with the way my goods were received. The hurdles were more about cash flow, management, and planning.

As the seasons passed, I began to think about where I fit into the bigger picture. Making the frames was the easiest part of the equation. Presenting them to the public was a puzzle I’d be working on for a long time. Heck, I still work on it.

At the core, I’m in the personal service slash luxury goods market. Forget that these are “bicycles”. They’re objects made for people whose decision making comes from the heart more than from the head. While I maintain that the work has to please me first, and in some cases please me alone, it will live a life with those who queue up and pay me. My goal is to make the experience enjoyable and memorable for all.

Depending on the season, the day, and even my mood, I’ve approached the bench as a servant, a coach, a psychologist, a BFF, and also as a tailor, a gunsmith, a luthier, and a chef, a watch maker, as Bijan and as Jil Sander too. It’s a life of fantasy and every day changes things. Back in 1980, the fantasies came faster than I could process them. I’m pretty sure this fellow heard back from me. But I never heard back from him. He must have found a table in another café. Or maybe another opinion. 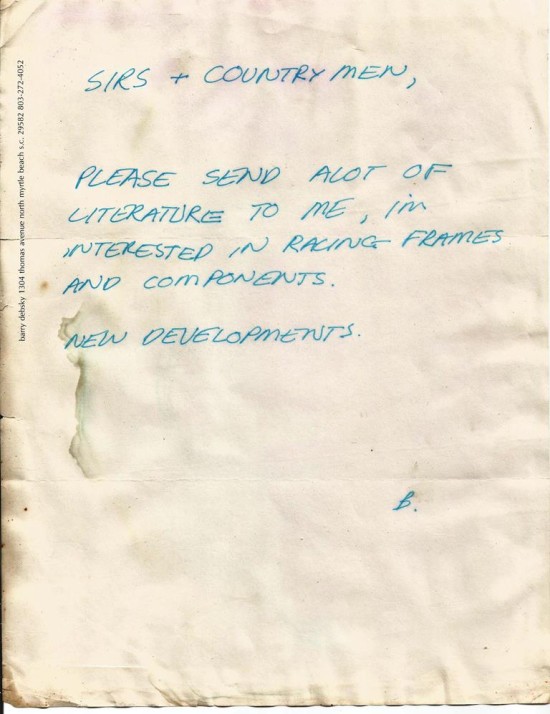