One piece of my puzzle, my first Hurlow frame, cost me a whopping £60.60 GBP. After it arrived, I’d order two more before I’d ride a bicycle with my own name on it. Bill Hurlow had a profound influence on me. The man’s work was, of course, beyond elegant. But the act of the commission, and those dozen or so letters we exchanged to make it happened, are what put the needle in my arm. Ultimately, I wanted to channel that experience and roll it into my routine.

It was a classmate of mine from Yeshiva, Henry Krol, who’d be the link between me and the framebuilder from Herne Bay. Henry knew I loved my Frejus Tour de France and encouraged me to contact Mr. Hurlow. The Frejus was the bicycle I bought at Tommy Avenia’s to replace my first ten speed bicycle, an Atala Gran Prix. All of this took place prior to my flight for London to spend a year with the Witcomb family.

There were many serendipitous paths taken before I landed in the trade. It was the stew of them that delivered me to a workbench years later. And even then, I was simultaneously ready for the task as well as bewildered, wondering how this all happened and where it would all go. Sometimes, playing pretend can make things real. I never had a business model. But I had a role model, and got very good at channeling. It’s a skill I’ve used many times since. 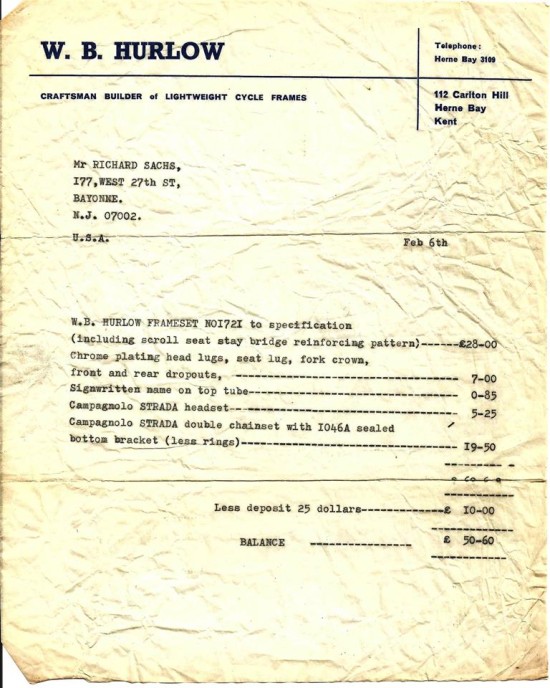