This is a printout of some final art that my decal guy output so I could, once and for all, make a final decision regarding a sweeping change I was making to my brand’s look that took about 12 years to achieve. Think most of the 1980s and into the next decade. I fell in love with the NBC Futura Bold typeface that only NBC had access too, and I had access to it. Well, I had the corporate identity standards manuals and it took me a long time to mine the pages I wanted (I actually only needed six that’s SIX letterforms out of the entire alphabet) and find ways to make a wordmark out of them. It was all about scale and spacing, That’s easy if you’re a graphic designer and have the tools. I wasn’t, but I spent a lot of time and money with 1) stat machines, 2) X-Acto Blades, 3) Spray Mount, and 4) Bainbridge board. For a brief moment I was smitten with Jil Sander’s look and wanted to borrow some of it for myself. I’ve lost track of the timeline but think this art file made it into the mainstream by 1996. And lasted until 2013.
. 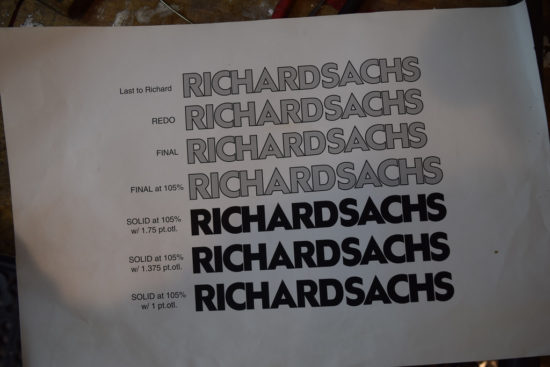