This is an article by Kristy Marks and appeared in the Connecticut Business & Industry magazine. I’d been in business for nine years. ‘Was one of a handful of frame makers in the states. I had an annual production of 100 plus units. And just, only just, starting to get a sense of where all the pieces fit into this puzzle called the bicycle business.

With typical youthful exuberance, I didn’t and couldn’t charge enough to make a decent living yet explained it away as the price one pays for doing his own thing. That’s the Woodstock Generation effect right there. I could have been doing almost anything then and found a way to work in that “…money isn’t as important as happiness and listening to your own voice” saw that seemed part of the times.

I’ve carried that time with me. I was 31 when interviewed. I’ve turned 31 a second time since. And while everything around me has changed, very little inside is much different. I knew early on that working alone was how I’d survive. Growth. Expanding. Turning this solitary pursuit into something more grand simply because that’s the model a successful brand takes as the years tick away – I didn’t get that memo.

The last line in this article reads, “Sachs is adamant about working alone. ‘I would feel awful putting my name on a frame that I didn’t make myself, knowing that it wouldn’t be as perfect as it should be,’ he says. ‘I insist that the actual quality be there, and not just the perceived quality.'”

By the time I turned 31 the second time, my prices were high enough that I didn’t worry about paying the bills. I’d long since made the choice to assemble fewer units and give each one more attention. I did have a brief stint in the middle 1980s when I paid another to work alongside me. Then I let him go, believing my vision couldn’t be realized with someone else’s hands.
. 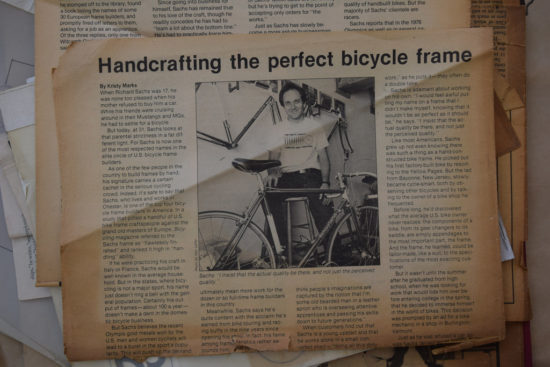