an intimate look into the life and mind of framebuilder 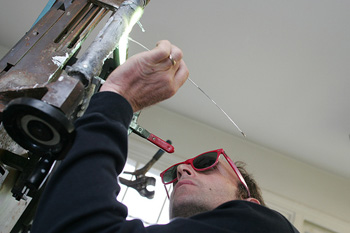 i can’t weld, and i can’t braze, and if i’m really honest, i’d be a bit nervous of having enormous gas canisters sitting in thewashingmachinepost bike shed. fortunately, i’m sure that health and safety wouldn’t be too happy about a naked flame in a wooden shed either which has saved us all from a charred future. but sometimes you feel that skills in the area of bicycle mechanics ought to stretch just a wee bit further than being able to fit a headset or rivet a chain, so i tried my hand at wheelbuilding, because somebody has already made the spokes, hubs and rims. all i have to do is join them altogether in some semblance of a wheel shaped object. and, despite the lack of practice engendered by a lack of island customers for same, i’m not too bad at it. but framebuilding…

…why would i? there are already a sizeable number of people who are far better at joining steel tubes than i’d ever be, so i’m sure the bike shed and the cycling world is a great deal safer in the knowledge that i’m sticking to wheels. fortunately, not all are as timid as i when it comes to mitreing tubes into lugs onto tubes, one of whom is currently in the rapha continental framebuilders feature, and who apparently has a waiting list as long as the output from the campagnolo chain factory. folks who have created this sort of aura (and waiting list) in this great big bicycle world that we inhabit will always engender a degree of admiration, but short of calling mr sachs on the phone to order one of his framesets, the likelihood of our gaining access to the inner sanctum are not particularly high.

fortunately, desmond horsfield has carried out that part of the equation for us. imperfection is perfection is a thoroughly fascinating look inside the mind and the connecticut workshop of richard sachs (who has one of the cleverest and coolest logos/headbadges i’ve seen in many a long year). this isn’t one of those ‘here’s how you you do it’ type movies, though there are plenty of moments to admire the man’s craft – dare we say ‘art’ – while the camera follows many aspects of his daily toil.

sachs himself comes across as a very self-confident man (there are links to fifty articles, features and interviews on sachs’ website); he states at one point that his customers don’t just want his bikes, they want him. quite probably a truism; there are many other fine frame builders the world over, including those at witcomb cycles, london, where sachs trained in his early years to ‘fill in time’ while he waited to start college. but a lengthy (reputedly around five years) waiting list does rather prove that mr sachs is one of the favoured few. however, he comes across as a particularly honest, diligent and constantly thoughtful guy who is also highly opinionated. you need only watch the lengths to which he will go in the search for perfection in even the tiniest details on a richard sachs frame. who knew you could be that precise with a file?

as a dvd, this is a gem. the filming, editing and sound are keenly produced, and while i know little about desmond horsfield, the end result truly seems to have been captured by someone who is just as fascinated with the subject matter as i am, and you will be. and continuing what seems a happy trend, the soundtrack is also particularly good. the documentary is somewhat short, running to only 28 plus minutes, but as someone who has never subscribed to the never mind the quality, feel the width dictum, the criteria really ought to be; ‘does it say what needs to be said in the time it takes to say it?’. there can be little doubt that it does. the opening sequence is brilliant.

the dvd can be purchased for $39.95 (about £21) directly from richard sachs website. order one immediately to see a master at work. maybe you’ll want to join that waiting list.