With the Piccoli Gioielli art files complete in 2009, I prepared myself for what’s next. Having brazed and filed more than 15,000 dropouts it was time to clone my vision and lighten my day to day labor load. The designs were deliberately a wee bit different that what I had been doing for decades. I’d taken the horizontal shape as far as I could. It would be verticals going forward.

I did myself a favor and had three distinct angles made because, really bro’ – that should cover the spectrum of frame geometries I’d be dealing with. And like any maker of craft would assume, there’s enough wiggle room in these mating parts to take care of the odd dimension that doesn’t play nicely with others as the intersections on that next bicycle tell you where they are going.

And then there are the outliers, those orders that require critical thinking, a trait that attests to why some of us are paid the big bucks. What does one do when the only two feet you have won’t stand firmly in the corner mapped out for them? You show all involved who’s boss and start bending some legs. It all works so well when the result looks like it’s what you had in mind all along.
. 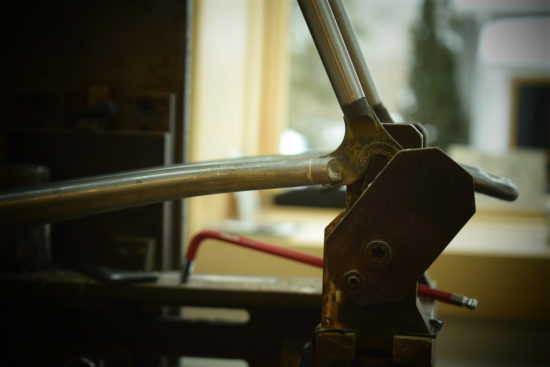