Bicycles are Tools, Not Ornaments

When Richard Sachs, who has been deeply involved in the handmade framebuilding industry since the tender age of 19, came to the first NAHBS show in Houston, he was heartened by what he saw.

There was an innocence and a heart to the show, a facilitation of true face-to-face connections between builders and riders alike. To this day, interaction and sharing continues to be his favorite part of NAHBS.

“I love meeting people with whom I’ve only had internet exchanges in the past; it alters the dynamic of all former and future communications. I also love talking to people who have only read my internet writings, so they in turn can get that changed dynamic from me.”

With everything he loves about NAHBS, though, Sachs feels that there have been some changes that may endanger the lifelong health of the show, and of the frame building community itself.

“Now, some builders make flashy frames just for the show, which are impractical for real riding,” says Sachs. “Bicycles are not art projects, they are tools, and to survive, I think there needs to be a paradigm shift in the industry back to this fundamental point of view.”

Sachs may be thought of as a naysayer to some, but his perspective comes from already witnessing one reinvention of the industry. Back in the 1970s and 80s, before large manufacturers made world-class bicycles, everyone turned to the handmade builders for their machines.

“Now, you would never see someone win the Tour de France on a handmade frame. We went from being the main source to being on the sidelines.”

Based on that history, Sachs worries that if some builders continue down their current road, a similar type of reappropriation may occur: “If we’re not careful, Trek or Giant will see the interest in fancy, over the top city bikes, and mass produce the designs themselves.”

Instead of trending towards flash, he would rather see builders take back some of what was once theirs by emphasizing technology, design, and rational material choices.

That being said, he nevertheless feels that his presence at NAHBS is important; the show is relevant, and so being a part of it is to remain relevant.

“NAHBS represents a reflection of the community,” Sachs says, “which I am still very much a part of. Everyday I go to my workbench. I still love to build bikes.” 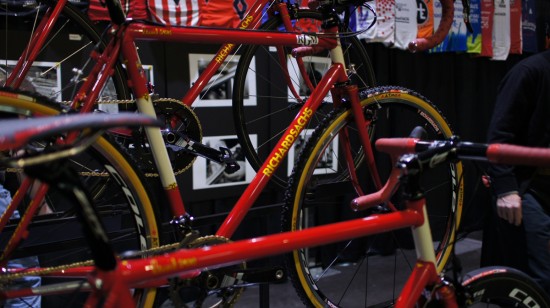