With the North American Handmade Bicycle Show starting in just another day, it seems an apropos moment to take a look at a new book about the man who is arguably the most outspoken and iconic practitioner of the frame building craft: Richard Sachs. Nick Czerula spent a year as he says, “as a fly on the wall of  Richard Sachs studio.” Based on the more than 120 images within the book, Czerula isn’t lying.

The book does nothing so much as document how solitary the work of a frame builder is. As romantic as it may seem to fit someone or to experiment with new geometries, frame building is mostly working with metal. Brazing it. Drilling it. Sawing it. Filing it. Getting metal shavings in your fingers. Czerula documents all this in crisp black and white images.

What’s most surprising about the book is just how stolen so many of the images are. Sachs is as self-conscious a frame builder as there is. And that Czerula could so blend into the background to get shots of Sachs going through the dailiness of his work, of his routines should not be under-appreciated. Czerula manages to capture more than just the serious, frame-builder-at-work Sachs. Bits of his quirky personality and humor come through as well as fierce drive as a competitor in cyclocross. 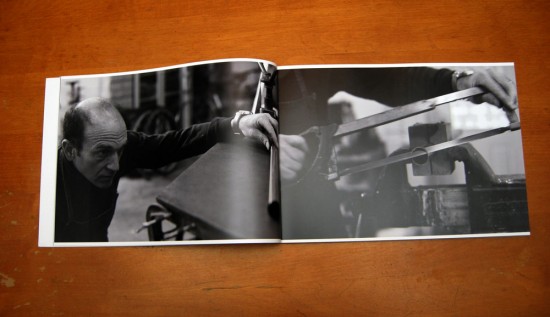 Think of the book as a portrait of one of the more outspoken craftsmen around. At first, I confess, the book felt incomplete because it features no text. Pardon me; I’m a writer and I tend to see a book without text as a bit like a burger with no fries. However, the more time I spent with the book, the more I came to see it as being an interestingly objective look at someone who is constantly defining his efforts in the written word. Had the whole frame building thing fallen through, Sachs’ original plan to study English would have served him well. His introspective nature has made him the most articulate frame builder out there. If you’re still curious why bike magazine editors have made him the most written-about frame builder on the planet, there’s a good reason. When we talk to him, we find a kindred spirit.

If you haven’t been following his blog. You might want to. It’s Sachs, unfiltered. Just him. No pesky bike magazine editors to get in the way. Check it out here.

To the degree that Richard Sachs exemplifies the craft of frame building, this book could be viewed as a cryptic how-to manual. This concept is reinforced by the book’s organization. It begins with Sachs prepping lugs and follows the process of building a frame through to its conclusion, right down to shipping it off for painting, prepping the finished frame for assembly and finally installing the parts to complete the bicycle. Along the way, Czerula does a nice job of reminding the reader that Sachs will be working on a number of frames at any given time. 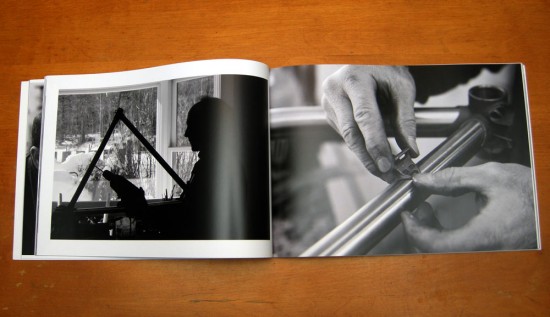 Printed in a relatively large landscape format (11.75″ x 8.75″), the book presents the images large enough to digest them, right down to the tiniest detail. The 110-page volume isn’t cheap, at $59.95, but efforts of this sort are rare and this shows a level care and devotion more books could benefit from. If you’re a fan of Sachs, or just a fan of frame building, this is well worth your time and money.

You can pick it up here.

The above article originally appeared on Red Kite Prayer and was posted on March 1, 2012.

« Bicycles are Tools, Not Ornaments
Richard Sachs, Man of Steel »