This book is a collection of black & white photographs showing Richard Sachs making a bicycle frame. There are no captions or words of explanation. It could be argued that there’s something about the craftsman’s work that is lost when you try to explain it. To those who are not mechanical or engineering-minded, some of the photographs will not make sense. Nevertheless, this series of photographs attempts to capture what that experience is.

The majority of the photographs are tight close-ups of his hands holding files or saws, images of equipment or tools in his shop, and unassembled pieces. Except for the last few pages of the cyclo-cross bicycle race, all the pictures were taken in his workshop. You can see his focus looking at him holding a file and almost feel the file biting into the steel tube.

The photographs are arranged in order. It begins with Richard reading a set of measurements on an order form. Next he is seen carving the lugs, cutting & filing the tubes, brazing them together wearing Ray-Ban sunglasses, and filing & sanding the frame. While they are all good that taken together tell a story, a number of them are stunning compositions. The last few pages show Richard Sachs riding in a Cyclo-cross race. As I looked at his face I was reminded a violin maker also plays the violin.

It is hard to explain the experience of what it is like to work with your hands; what it feels like to hold the tools that become extensions of your own body. I went to high school in Chicago where I took viola lessons. After school I would go to Dudley Roth & Son. They had a walk-in vault to store the violins couriers brought from museums all over the World to be repaired by Arno Petish. When was learning to be a violin maker in school the class was taken to the woods playing violins and taught to select the best tree. He carved all the handles of his files to fit his hand. As I stood watching him I was seeing someone between the science of acoustics and the art of music. Richard Sachs is at that place. This book captures the experience I had watching Arno Petish.

Because there is no explanation of what is in the pictures, the reader needs to already understand the bike-making process at in order to enjoy the photographs completely. This is a book for the cognoscenti. It would be accessible to a wider audience if there were at least a few explanations. There are no theories of frame construction and no explanations from Richard about the various processes he uses and why he chose them. No discussions about tubing, fork rake, frame stability or how to tune a frame for different ride properties. If you want to hear more about Richard Sachs get Imperfection Is Perfection: Richard Sachs, Bicycle Maker where he talks about frame making.

This is a small, thin (110 pg) book that, like a Richard Sachs frame, is both high quality, expensive, and low-production. As good as the photography is I cannot help but think words would have added to it. Still, this must-have for anyone with a Richard Sachs frame who wants to see what went into making their frame or anyone who already understands bicycle construction who works with their hands.

This is a rare book that is very collectible. 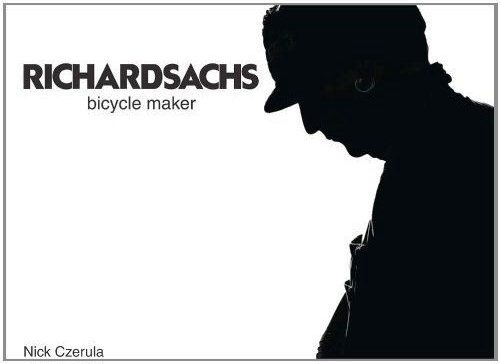