Bring Back The Elegance

There’s never been a moment when the dots between making bicycles and racing them weren’t connected. I can’t imagine a life – my profession – without the sport being there with each saw cut, file stroke, brazing task, and detail that comprises my work. The arena of competition is the most important spanner in my experiential tool-box.

I was hooked on racing long before I put my name on a down tube. Lured by the romance of its history in Europe, I found joy on the pages of any cycling magazine I could open. From France. Australia, England. Italy. I subscribed to the lot of them. Without even knowing that fate would one day place me in this trade, the needle was in my arm. And stayed there.

Bicycles then were a thing of beauty, and all made by hand. I was happy to land in this corner of the industry where tailors crafted goods for those who rode in anger. It was lovely to contrast my days agonizing over millimeters, fractions of a degree, and if the metal being coaxed was duly tamed, and then see it getting beat to death on the open roads each weekend.

Bicycles now are far less beautiful and many resemble appliances. It’s harder than ever to look at what I do and think it will endure. My frames come alive when assembled, but components now are manufactured primarily for the industrial-made sector. I often select an item simply because it’s all that’s left on the menu. Some look fine, others border on compromise.

How to deliver beautiful bicycles when so many of the parts are so ugly? In 2017, it’s not my biggest challenge, it’s my only one.
. 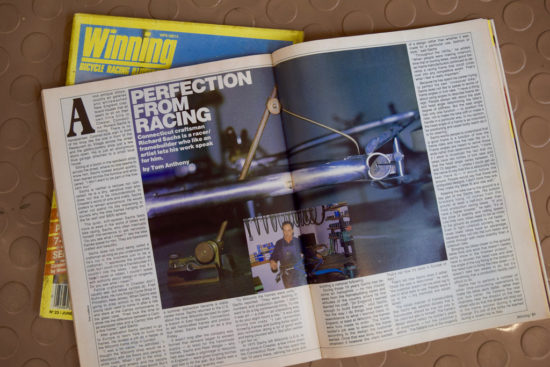