I don’t know how many file strokes it takes. My tool of choice is a Bahco 5 1/2″ Barrette with an aggressive cut. I think these are the ones with the low numbers. 00 for example. Not sure. But it takes a lot of strokes, and I don’t care if the return dulls them. I buy these by the dozens. And I charge a lot. Somehow the expense gets covered. Point is, I just keep filing until I don’t. And that’s just on the lugs. And it’s also on the fork crown. The dropouts. All of them. On the bottom bracket shell. You get the picture. You get it, but I’m the one doing the work. Done enough, and often too, each throw adds to the already established muscle memory. I mean. If I have to think about any of this, I’m fucked. Heck. If I’m fucked, what about the client writing the big check. So yeah. I have to have a sense. My reality is that the sense began its development in 1979, some seven years after I first held a file in my hands. And before that, I was a student. But that first of what would be many trips to Italy to see how the established masters of the trade were standing at their benches – that 1979 sojourn, the one that lasted 20 some odd days, and what I saw, and who I saw – it never left. It grew inside of me and in spades. I wanted some of what they had. Those were different times. Those times are gone. But I carry with me some of what I saw, what I learned about how work was done, and the proper way to stand at a bench. Oh and the files I use are flexible, so I worry not at all about flat spots, or undercuts, or something that would look like Bizarro’s face. And my WAG is over 54,000 strokes per frame. That’d be a two point five day frame. The team frames take less time, so they’d have fewer strokes. 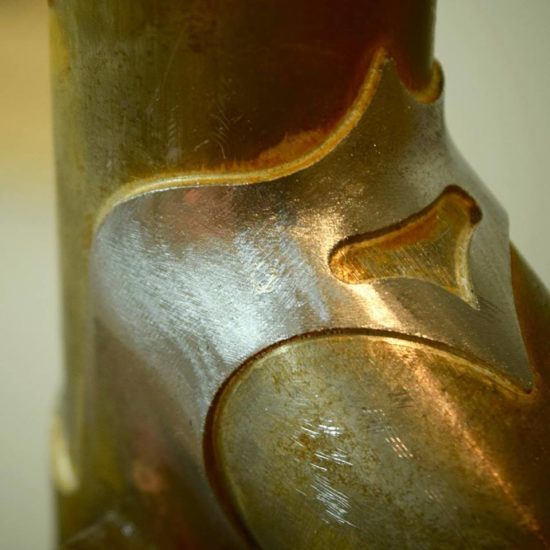