We all descend from our pasts and arrive with what fits and suits us for a given moment. Each day the order of content in that parcel changes. If the baggage is heavy, we find ways to forget it’s ours, or we try to rationalize it and add it to a shelf that likely has more of the same. Some memories are alarming and some we want to forget. Others can make us smile, wishing such times could last forever, or at least be recreated at whim.

I listened to a conversation last night. John Galliano sat across from Charlie Rose. The news about the former is well circulated, and I read about his tirades several years ago. But that was then. Some stories about fashion houses make my radar and remain. This particular one, about Galliano, didn’t. The designer’s 2011 spattering of anti-Semitic remarks derailed his career and his life. Was the hate real and waiting for a moment to surface, OR was it the byproduct of his substance abusive lifestyle? Regardless, he will forever have this as part of his past. I forgot about that past until Charlie Rose reminded me of it.

The short of it is that Galliano crossed a line, arguably in spades. The long of it is that we all have. Coming to the conversation cold, I was drawn in by the designer’s reflection on his past, and how sincere it was. He’s had two years to reassemble his thoughts and make some judgments regarding how he became a monster, even if it was only for a short period. I don’t believe we are born to hate, or even to push buttons. But we all cross lines.

Sometimes it takes the obvious to see the obvious. Some actions are inexcusable. Some come from a place we can’t even locate. Some actions alienate even when that was never the intention. We all cross lines. When we hear of another whose present is frayed as a result of some past that can’t be explained, we are also hearing about our self. Galliano, like all of us, has demons to tame. And every day is a new chance to tame them. That’s what became so painfully obvious to me. 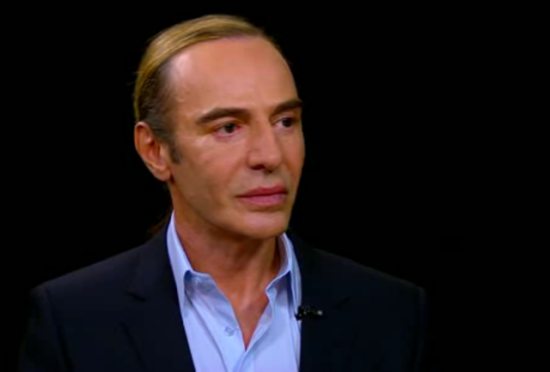