For sale is my entire collection of Campagnolo derailleurs spanning the late 1950s through the late 1980s. This is among the most complete Campagnolo derailleur collections in existence. It may be the only collection that has every single dated Campagnolo NR rear derailleur in the condition listed here. It is comprised of only NIB/NOS (New In Box/New Old Stock) components. Everything shown for sale is new, never used, not a take-off, free of tool marks, and complete as packed the day it left the loading dock at Vicenza.

I am including the pre-1970s derailleurs too. They are Gran Sport, Record, Sportman, Sport, Sport Extra, Valentino Extra, Nuovo Valentino, and Velox. These are all new, never used, not a take-off, free of tool marks, and complete as packed the day it left Vicenza.

The collection of single and double lever shifter assemblies shown on Flickr is included too. These are all new, never used, never mounted, no tool marks, etcetera.

I will also include the following duplicate Nuovo Record derailleurs NOT SHOWN in the Flickr set: 1972, 1973, 1973, 1979, 1984, and 11. Also included is a steel pre-1970 Record steel derailleur. These are all also NIB/NOS. You will receive thirty three Campagnolo rear derailleurs and sixteen shift lever assemblies – everything NOS.

You can spend decades putting together a similar collection and matching the sequential dates of all the derailleurs shown. You can use the internet to assemble the same parts quicker using multiple resources. I am offering everything described and shown for $14,000. Please contact me at therichardsachs@gmail.com if you are interested. 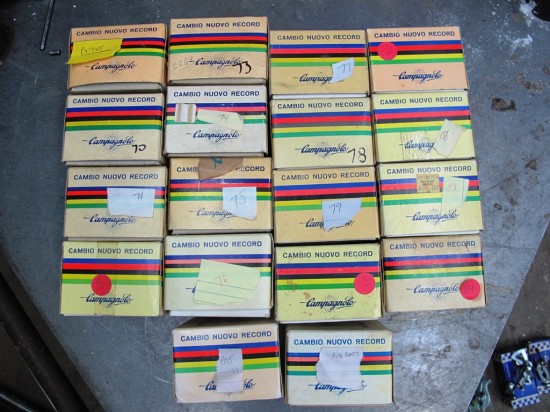 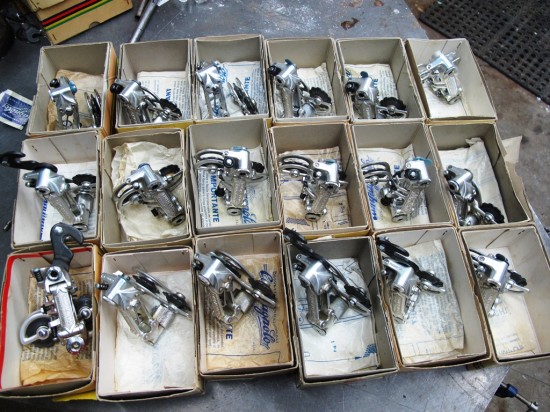 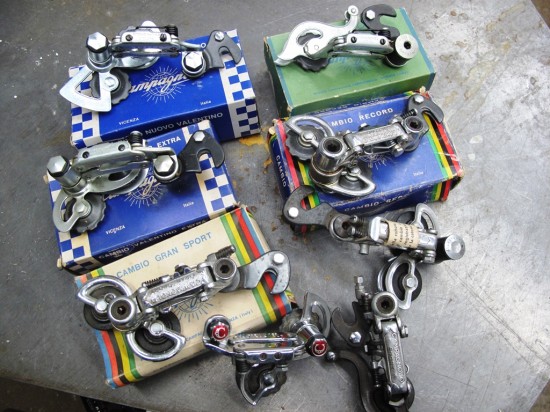