Many folks enter the framebuilding niche by way of the message boards and some leave the same way. There’s a certain vibe surrounding the trade that has attracted more than its share of voyeurs. From my vantage point, it appears that a mindset exists that includes not only learning to build a frame rather than take time studying the process, but also an infatuation with machinery, fixtures, tables, and power tools. That’s backwards atmo. I have some thoughts about the learning experience and about where stuff fits into the equation. While necessary – very necessary – the tools don’t do the job for you and will offer little help until you know the task at hand inside out and backwards and can perform it as if the tool was never available in the first place.

Downsize the fantasy. I built the first 700 or so frames with a Rube Goldberg compilation of fixtures, clamps, and angle iron, and with no alignment table within 1,200 miles. Equipment is nice, but it’s not a substitute for a procedure. I am not suggesting a monastic/framebuilder path, but strongly against getting four tons of steel and then listing it for sale in two seasons when the dream expires. It must be said – you don’t need all this stuff especially at the front end.

If 1) you’re a beginner, and 2) you’re on your first few dozen frames, you’re on the far left hand side of the developmental time line, and the tools will more likely stymie you than help. My advice is to pace yourself into the profession you have in mind. Elementary skills and a deep understanding of materials and procedures don’t come from being around V blocks, dial indicators, and Blanchard ground surfaces.

These words are not meant to help you improve by next week or even by next year. The advice is aimed at helping you achieve your stated goal(s) – period. Even if it isn’t all taken it can still have value. Some folks like to be around things that they perceive might make the task easier or better. The niche has been littered with this perception and some of us in the trade are guilty of being enablers because we show so much of our work in progress and on a regular basis. The way to get to the next step is through routine – through endless repetition – until the task you are working on and through becomes second nature. In music it can be the scales. In percussion it may be days if not months of endless paradiddles. In framebuilding, each of us finds a way to have the operations drilled into us so that the hands and eyes work on automatic. According to my opinion, tools get in the way of this, and sophisticated tools more so because the user is then (also) indentured to the tolerances that come with high end fixtures and measuring equipment. At some point you will realize that the tools don’t make the frame, and won’t make the frame better unless you can feel and sense what is happening. If it were as easy as 1) take some pipes, 2) drop them in some blocks, 3) join them, and 4) measure the results, it would be another story.

I was baptized in a work environment (which was typical of the day) in which there were no fixtures – none. There were drawing tables that allowed the staff to compare cut tubes with design parameters and the horizon (there were no slant-y bicycles back then). The tables had well worn scribed lines representing angles, setback, lengths, and frame drop. There were also some spring clamps and angle iron around that allowed for some primitive (by today’s standards) holding of parts. At the end of the day though, everything was brazed against a well assembled wall of firebricks. There were hardware store quality straight edges that helped keep parts in plane. There was even a complete absence of power tools. It all may seem bizarre and contrary, but in hindsight it was the best learning environment for me. Even if I were going to teach someone now, I would proceed as if the fixtures and tooling I now possess were not part of the equation. If you can’t feel, discern, use intuition, or listen to the material, all the q/c checks and dial indicators in the world will add misery to the process. Let’s be clear though – I do have sophisticated fixtures and checks and balances, and my frames are measured precisely (as opposed to very precisely – sic). I brought my tooling into the 20th century after assembling some 1,000 frames in ways similar to how I was shown in London. After ten years at the bench, I began systematically upgrading my tools, frame fixtures, and alignment tables. But once each component was in place, another long learning curve began as I taught myself how to man each new work station effectively and use it to its fullest.

I would never want a different introduction to the trade and the processes than the one I had. Once it all sunk in, it became a perfect foundation on which to build. So think about want you want to accomplish. We all come to this with different aspirations. I hope yours are reached easily. 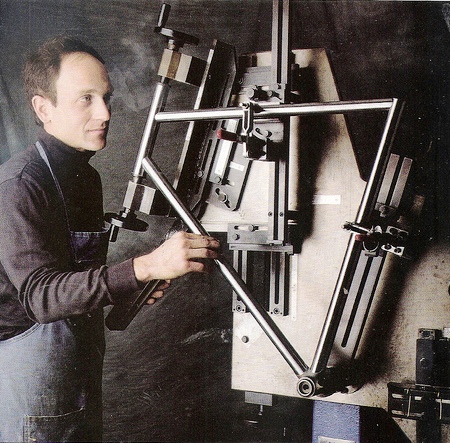