Write what you know about. That’s good advice. I’ve made it part of my routine. For as long as I’ve been popping off online it’s been a steady string of anecdotes based on what I do, how I got here, who and what stood in my way, and how I made it to the other side. I have enough elements to make an According To My Opinion cocktail. Are there any Atmoholics here?

Joining the ranks of those whose names graced the machines shown in magazines I took as an adolescent wasn’t a dream. Or a goal. As a youngster, I thought bicycles were cool, but it never went much further. And then fate happened. The one dimensional teenager became the single-minded man. So who left the window open and let all the years blow away?

Despite the creative moments, any artistic flourishes you may see, or the notions of others that bicycle making is craft, I’ve always considered it just what I do rather than some form of personal expression. I wasn’t called to my trade; I fell into it by accident. But I embraced the work because it was an interesting way to spend the days between race weekends. What’s changed? Only the dates on the checks I write.

Many people now want to be framebuilders, and a few actually know what goes where. Then there are the cats who seek approval for making something by hand that’s often assumed to come from the back of a delivery truck. Others crave recognition for being out of step. There are the How hard can this be types too. You know these guys, the ones with all the formulas and more machine tools than common sense.

According to my opinion, there will be a growing field dotted with the markers of those who may start at the bench but who’ll never finish there. Need another drink? I’ll be back again in ten years.
. 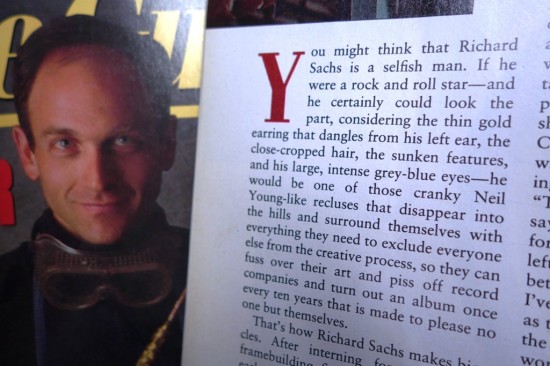