From September to February, all over the world, cyclists gather to partake in a sport unseen by most people. On the agenda: racing on and off their bikes on a course dotted with sand traps, logs, steep hills and other barriers. Entering and exiting the corners is fast, transitions from pavement to soft ground are frequent and sprinting from a remount is expected.

Welcome to Cyclocross (CX). This is not mountain biking or road racing, rather it’s something in between, drawing men and women who are passionate, fit and competitive, but also friendly, dedicated to their fellow racers and CX community oriented.

In a sport where bodies and equipment are pushed to their limits, having the right gear is essential. The bike must be well designed, built by someone who understands the demands of CX and made to fit the measurements of its rider. That’s where Richard Sachs comes in. A master craftsman of hand-built, made-to-measure bicycle frames, and an avid CX racer, Sachs has been a fixture of the CX community for 35 years.

He’s also the founder of the Richard Sachs Cyclocross Team (RSCX), which currently includes six men and one woman. “This is not a group for which people are ‘hired,’” says Sachs. “When a spot opens, we know intuitively if a particular person will be a good fit. My wife Deb and I treat this like a 35-year performance art project but with real people as the canvas. It’s a family. A band. A troupe. We are all the same heart that beats when the event begins and pulses race.”

DWR sat down with the team and asked them about Sachs and their sport, and here are some of their responses.

“Richard brings experience and knowledge to his craft. Nuance is not a gift afforded to the naive. His bikes reflect a deep catalogue of history, but also a desire to not rest on the laurels he has achieved. The bikes change and evolve, showing a master builder who is eager to keep learning.” – Daniel Langlois, CX racer

“Richard is what’s most special about the bikes. Riding a Sachs isn’t just riding a bike, it’s being part of a group that appreciates doing things differently.” – BrittLee Bowman, CX racer

“A Richard Sachs bike is a culmination of many things in the form of an object. It’s equal parts Richard’s life experience, time at the workbench, and time as a racer himself that make the bike what it is. Many other people can make a perfectly fine bicycle like this but none can give it what Richard can.” – Dan Chabanov, CX racer

“It’s the craftsmanship. Most bikes today are not built with the care that Richard’s bikes are crafted with. They are built custom for each rider. Most bikes have a one-size-fits-all frame design.” – Greg Gunsalus, CX racer

“What matters is the rider’s confidence in their machine and intuition through it. I know I am riding well technically (e.g. during a slippery, muddy race) when I can envision the tires of the bicycle in my mind’s eye as hands touching the ground. Richard builds bikes that I can wrap my head around more completely and deeply than any others I have ridden. The bike has a character of its own, but not one that is unpredictable. It’s exciting to ride.” – Sam O’Keefe, CX racer

“What is unique about the Richard Sachs bike is the level of passion and effort that went into it. For most bikes, passion or effort goes into the design, but the end product is just a generic frame that was made in a factory. The Richard Sachs frame, however, has had effort and passion throughout the whole process. From the design to the paint job, the bike is made with such a level of love and professionalism, it is hard to not fall in love with it.” – Michael Owens, CX racer

What do you love about Cyclocross? What draws you to it?

“What makes Cyclocross the most appealing sport for me is the family like community. I first found it as an offseason time killer from road season and immediately was hooked after having everyone in my race come up to me afterward to introduce themselves. I still talk with the people who I met at my first ever Cyclocross race, even those who are no longer racing, and that is what I love.” – Michael Owens

“Mud, dust, gravel, sand, slippery grass, steep kickers, off camber anything… it’s all so challenging. What initially attracted me and keeps me coming back for more is the constant challenge of perfecting the many seemingly simple skills it takes to carry the most speed through the course.” – BrittLee Bowman

“I like how engaging Cyclocross is. There is never a moment where you don’t have to pay attention. You are always sprinting, doing an obstacle, or thinking about how you will try to win the race.” – Greg Gunsalus

“I started racing Cyclocross when I was 12. I’m 24 now. At the time, it was what my friends at the local bike shop were doing on the weekends. I was playing other team sports, but the purity and intensity of cross struck me as something worthy of devotion. Since then, it has been an enduring part of each year, carrying me around the world and providing an incredible arena for aspects of my personal development as well.” – Sam O’Keefe

“Cyclocross is a humanist sport. There are many controls and at least as many variables to it. It breaks down to a very individual level at the point that a competitor reaches their absolute limit. Leaving a race knowing there was nothing held back is a very rewarding experience.” – Daniel Langlois

“I first got interested in cross around 2006. I really enjoyed that in a cross race you were not only battling the other riders but the course and the conditions as well. In many ways it was the added spectacle and challenge of racing through rain, snow, and mud that really drew me in.” – Dan Chabanov
. 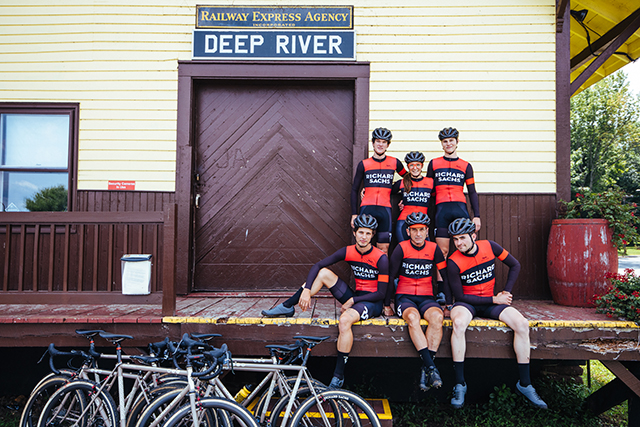 .
Design Within Reach, Herman Miller and House Industries are proud to sponsor the RSCX Team, a celebration of sport, community and great design. Our friends at Rapha supply the team’s kits. To see the team in action, their race schedule is available at richardsachscyclocross.com.

To view this article by Gwendolyn Horton and all of its images, see blog.dwr.com

« Pastaio via Corta
Being Found »